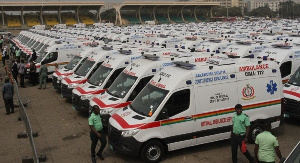 The National Ambulance Service Dispatch Centre says it is recording as much as 200 prank calls every hour, since the introduction of the 112 emergency number.

Speaking in an interview with Citi News as monitored by GhanaWeb, the Head of the Dispatch Centre, Matilda Nartey, this worrying situation is hampering the work of the centre.

“Prank calls are giving us a very big problem. It is making our work very difficult. Prank callers are just engaging the line to prevent genuine cases from getting to us. Ever since the 112 was launched, within an hour we receive more than 200 prank calls,”

Madam Nartey however revealed that the centre together with the security agencies are putting in place measures to ensure that persons behind the prank calls are named and shamed or prosecuted if possible.

‘Some call just to insult and some even call to demand money. We’ve been writing all the numbers that have been calling for us to give it to the Telcos and also to report to the police. If it will be possible, the individuals behind that could be prosecuted,” she added.

Speaking on a related issue, Madam Nartey revealed how some major hospitals are rejecting patients brought to their outfits for emergency services, due to what has come to be known as the “no bed syndrome.”

“Sometimes the hospitals will tell us we didn’t confirm whether they had beds before bringing the patients and we can be roaming with one patient from one hospital to another. When we are lucky enough to get a hospital, in most cases they tell us to leave our trolleys behind, because there is no bed and this makes our work very difficult, in case of another emergency.”

Each constituency in the country has been assigned an ambulance, whilst 112 has been announced as the new emergency call number.