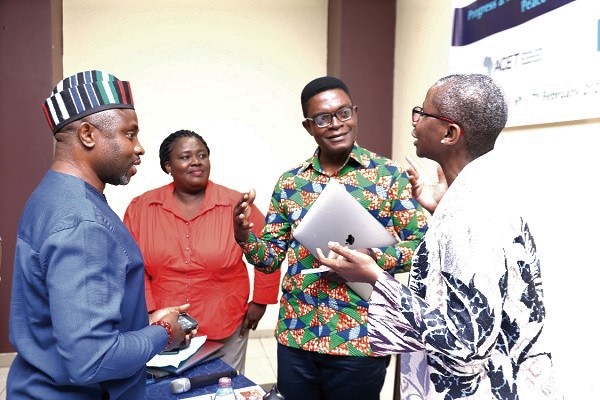 Representatives of electoral bodies in six West African countries have begun a two-day meeting in Accra to discuss ways to strengthen the integrity of elections and how to manage political transitions.

It is on the theme: “Progress and retrogression on electoral processes and transitions in West Africa: Peace and security concerns and consequences”.

Among other things, the conference will interrogate the progress, retrogression, gaps and lessons from the conduct of elections and transitions in West Africa, with the aim to inform African policy options for improved electoral processes.

Also attending the conference are representatives of civil society groups and political parties.

The SVNP is a continent-wide network of policy, research and academic organisations in Africa that are working with the Africa Programme Woodrow Wilson Centre to bring African knowledge and perspectives to peacebuilding in Africa.

The Executive Director of WANEP, Dr Chukwuemeka Eze, said at the opening ceremony yesterday that the continent had come a long way in the holding of competitive elections, even though the elections were sometimes characterised by violence and conflict.

He said while a country needed to choose its leaders through fair and competitive elections and ensure basic liberties and respect for the rule of law, the situation was different in many countries in the sub-region and on the continent as a whole.

“The fiercely competitive nature of party politics has been a factor threatening stability in the region, largely because there is widespread perception that elections are winner-takes-all or must-win events,” he said.

Dr Eze explained that politics and elections were no longer viewed as the preserve of the state and its agencies, considering the fact that more citizens were demanding accountability in governance, even at the peril of their lives.

“In most West African countries now, citizens are no longer passive recipients of information divulged to them. They pose questions and demand answers. They make informed assessments and thereafter define and apply repercussion,” the Executive Director of WANEP said.

He said since political stability and accountability, particularly through elections, were becoming more elusive, discussions over alternatives for Africa’s future had featured at various fora, which demanded that all necessary steps be taken to ensure that electoral periods did not derail development.

In a keynote address, the Executive Director of the Institute for Democratic Governance (IDEG), Dr Emmanuel Akwetey, recalled some of the challenges confronting electoral processes in Africa which necessitated appropriate actions by stakeholders in order for democracy and good governance to flourish.

He said electoral processes on the continent had, in some cases, been characterised by manipulation and deliberate disregard for electoral laws, to the extent that election outcomes had been rejected, thereby contributing to undermining development and the consolidation of the desired democratic culture.

Dr Akwetey indicated further that one factor that threatened democracy in Africa was the financing of political parties by unknown financiers who controlled the parties when they got into power.

He called on ECOWAS and the African Union to regulate political parties and find solutions to their financing.

'Don’t wait for us to die' – Ghanaian students in China to government: Ghanatoday.net