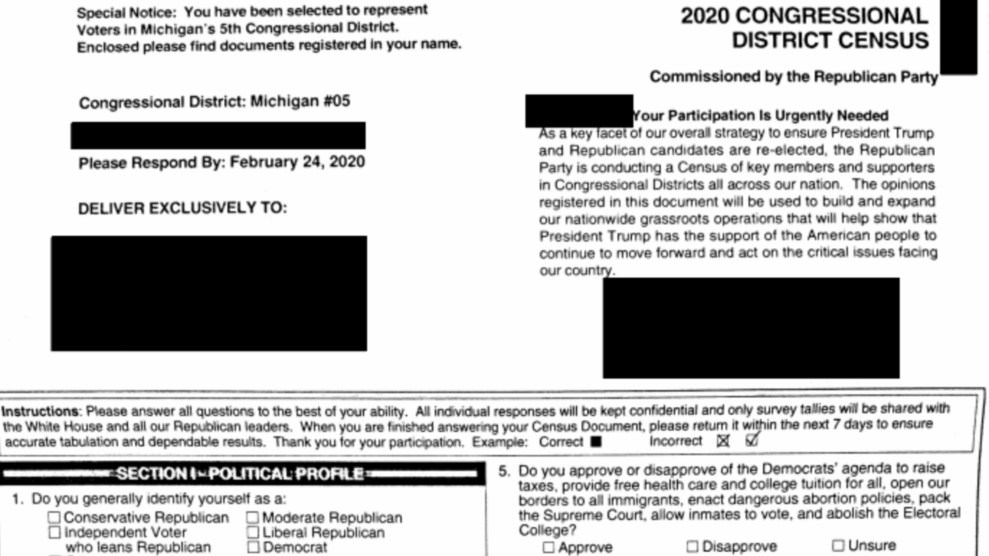 Here’s something sleazy: In 2019, the state of Montana had to twice warn voters about mailers from the Republican National Committee disguised to look like official 2020 Census documents. They were actually requests for money and voter information to help re-elect President Donald Trump.

But the GOP hasn’t stopped.

In response to our recent request for your political mail, a Michigan resident sent us a document that looks almost identical to the one the GOP came under fire for last year. (We’ve lightly redacted the document.) Our reader isn’t alone—a Michigan TV station wrote about the practice causing “confusion” recently, too. We’ve contacted Michigan’s census officials and are awaiting comment.

While the RNC did not respond to our request for comment, it told Montana—and the local news station—that it wasn’t attempting to mimic the Census Bureau. It said it clearly marked that these were from the Republican party.

Yet its use of capitalization suggests otherwise:

In 2010, the last time there was a census, the RNC did the same thing. That year, Congress even passed a law to try to stop it: the Prevent Deceptive Census Look Alike Mailings Act. But the regulations are weak, and the mail our reader got in Michigan likely isn’t illegal. To be fair, both parties use tricks to get voter information and money: a 2018 report from the Baltimore Sun found the Democrat party was sending a fundraising ask packaged as a research survey. Bad, certainly. But to tie it to the actual Census is a bigger step.

To confuse people about the official Census process, which has already begun, could harm the count, officials worry. “We want to immediately squash any confusion,” Emilie Ritter Saunders, a spokesperson for the Montana Department of Commerce, told the Washington Post in 2019. She was concerned about a mistaken count—which could affect federal funding. “Estimates show that Montana is also on the cusp of receiving another congressional representative,” she said.

As Mother Jones reporter Ari Berman has reported, at length, the Trump administration has attempted to subvert the process of the 2020 census to entrench a white majority. These mailers only add further confusion to the process.

Apart from my mum's death, next painful thing is how Mahama killed my business