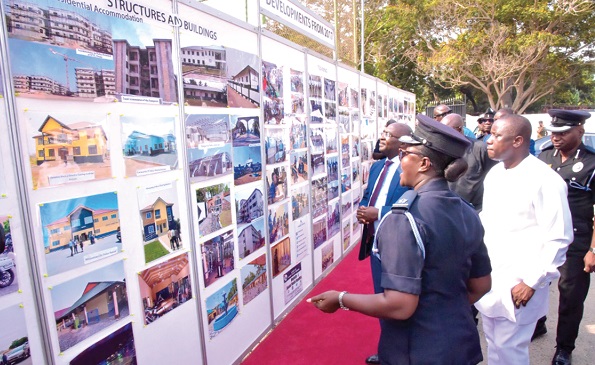 Vice-President Mahamudu Bawumia viewing some pictures on display at the 2019 Police WASSA in Accra yesterday. Those with him include Mr Dominic Nitiwul (right), the Minister of Defence

About 20, 000 officers of the Ghana Police Service (GPS) across all ranks have in the last three years been promoted as part of efforts to boost morale of the personnel, the Vice-President, Dr Mahamudu Bawumia, has stated.

In addition, he said compensation paid to families of personnel who lost their lives in the line of duty have been increased significantly.

Dr Bawumia made this known at the GPS commemoration of the 2019 West Africa Security Services Association (WASSA) which took place at the Police Social and Fitness Centre in Accra yesterday.

He said the measures were efforts by the government to encourage officers whose morale had gone low prior to the coming into office of the Akufo-Addo administration.

He commended the service for its work in intelligence-led operations, informant award system, public sensitisation programmes and in-depth criminal investigations, saying: “it is these initiatives that have put you on top of the task of dealing with organised crime and protection of lives and properties.”

Also present at the ceremony were the Minister of Defence, Mr Dominic Nitiwul; Chief of Defence Staff, Major General Obed Boama Akwa, and some retired commissioners of police.

There was also a musical performance by Chief Superintendent Kofi Sarpong and Francis Amo, supported by the Ghana Police Band.

He lauded the service for continuously adopting sustainable strategies to mitigate and counter internal security threats.

He said the government would continue to motivate the service by providing the necessary logistics and build the capacity of personnel.

He mentioned logistics to be provided to include sizable weapons, body cameras, purchase of three helicopters and training for 15 personnel for a K9 unit that is to be established. He said accommodation for the service would also see an improvement.

The Vice-President encouraged the police to employ modern methods of policing since crime had evolved, leading to formation of transnational criminal networks. He further called for a paradigm shift in the relationship between the police and the public.

The Vice-President added his voice to calls for the country’s roads to be made safer and described the spate of road crashes as regrettable.

“The government is playing its part by digitising and connecting the databases of the National Insurance Commission and the Driver Vehicle and Licensing Authority to that of the police personnel for easy confirmation or otherwise of the authenticity of vehicle insurance payments,” he explained.

He further gave an assurance of the government’s determination to ensure that this year’s elections are conducted in a peaceful atmosphere.

The Minister for the Interior, Mr Ambrose Dery, commended the police for the good work they were doing.

He reminded police personnel to be mindful of the task ahead even as they enjoyed themselves on the occasion.

In a speech read on behalf of the Inspector General Police (IGP), Mr James Oppong- Boanuh, he stressed the service’s commitment to ensure that this year’s elections, both presidential and parliamentary, were conducted peacefully.

Mr Oppong-Boanuh was happy with the passage of the law against vigilantism and asked political parties not to do anything that would go against the law.

Touching on logistics for the service, the IGP commended the government for providing the service with over 700 vehicles in the last three years.

He said the government had also acquired three helicopters for the service while six police personnel had been sent to South Africa for training to operate the aircraft.

He said the service made modest gains last year even though it was not without challenges and cited the death of 11 officers including a female in the line of duty as very regrettable.

Mr Oppong-Boanuh called for more police personnel to be recruited to meet the increasing demands by communities for police stations.

He gave an assurance that the service was ready to defend any officer who conducted himself or herself professionally, saying: “The bad nuts in the service are either being prosecuted, are on interdiction or are facing some internal sanctions”.

So Akufo Addo, Where Is The Fight Against Corruption If Ghana Is 3rd In The World?

So Akufo Addo, Where Is The Fight Against Corruption If Ghana Is 3rd In The World?

In Canadian politics, Erin O’Toole might be the pandemic’s biggest loser