Life as a plus size woman – Di Asa’s PM bares it all: Ghanatoday.net 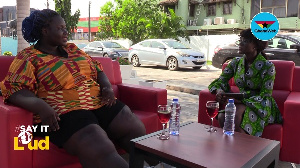 Winner of Atinka TV’s ‘Di Asa’, Precious Mensah affectionately referred to as PM, has expressed worry about how plus-size individuals are treated in the society.

Speaking on GhanaWeb’s socio-economic and political show, ‘Say It Loud’, she narrated the bitter experiences she has had to endure from persons who consider her “not fit”.

According to PM, “it doesn’t make sense” when people look down on her. She reiterated that plus-size individuals are not lazy but rather capable of doing whatever they set their hearts to.

“We are all human beings; I am not an animal for you to be treating that way. It is bad, you don’t have to act like you’re more special than others (plus size).”

In this episode of “Say It Loud”, Precious Mensah recounted the number of times she had been turned down for job opportunities due to her size. She is advocating for the inclusion of all persons into society regardless of one’s body type and size.

To her, body shaming is a major challenge that persons who look like her have to endure.

Insults and ridicules are directed at her on a daily basis but despite all these, she has learned to embrace herself.

PM, is currently on a mission to empower others who look down on themselves due to the society’s definition of “beauty”.

“I don’t let little things get to me. That has got me moving to this extent because there are certain things, I hear from people… I just move on. If I had allowed those things to get to me, PM wouldn’t have been here by this time.”

Precious Mensah, who is on a weight loss journey believes that it is very expensive, considering what goes into a healthy diet and the amount of money charged at fitness centres.

Watch the full episode of “Say It Loud” here:

I’m not arrogant but only speak my mind – NAPO

I’m not arrogant but only speak my mind – NAPO