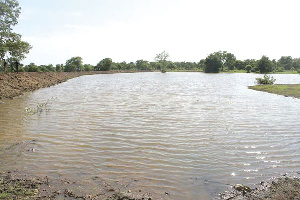 Three years on since assuming office, and with the construction of a number of many dams in the northern region under the One Village, One Dam initiative, the promise by then candidate Akufo-Addo and its execution by his government appears to be one of the greatest policies to positively affect farmers in the northern part of the country.

Even though a number of villages in the north are yet to benefit from the One Village, One Dam initiative, a news feature broadcast by Ghana Television has proved the significant impact the dams built so far by the government is having on farming and many people in a number of communities in the northern regions of the country.

Hitherto, the frustrations of farmers in the north heightens around this time of the year when the harmattan intensifies, leaving their farmlands extremely dry and not conducive for farming. Also, they struggle to feed their cattle and other livestock, as they had to travel several kilometers away to feed their animals and also quench their thirst.

However, the construction of the dams have now provided timely reliefs to these farmers, as showed in the GTV feature. According to the farmers themselves who spoke to GTV from various communities, the dams have changed the dynamics as they are now able to farm during the dry season and are able to also feed their cattle without travelling many miles.

“We used to go far with the cattle and fetch water. But now that the dam is here, it is helping the rearing of the animals. There is also wet grass so they feed on the grass and then they come and drink the water,” 75 year old farmer, Andrews Sampana told GTV.

“These days, we are able to farm even in the dry season. As a result, we make some money.”

Similar words of satisfaction were echoed to GTV in several parts of the northern regions they visited where the government has constructed irrigation dams for farming.

The One Village, One Dam initiative is not only providing timely water for farming and cattle rearing, it is also providing alternative livelihood for farmers who decide to down their tools completely during the dry season.

As was showed in the GTV news feature, some of these farmers resort to fishing in the dam during the dry season to make a living.

Like Oliver Twist, farmers in the north are asking for the government to construct more dams.

TK: The Politics Daily - The Atlantic

TK: The Politics Daily - The Atlantic

30 years since Mandela was freed, where does South Africa stand? | News