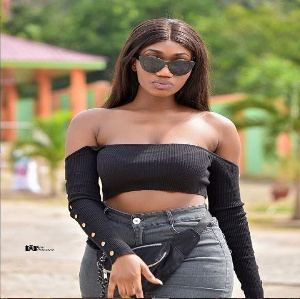 Believe it or not, celebrities engage in publicity stunts to promote their yet to be released singles, movies, projects or just for the attention. Sometimes the stunt totally works; and in some instances it completely backfires.

Another reason is that once they make it, the pressure of staying at the top and being relevant is heightened. The more people talk about a star, the more popular they are and the more money some make.

It is interesting to know that some publicity stunts are so well orchestrated that you would never know it’s fake, while others are so embarrassing you’re left wondering if the stunt was worth the buzz.

Whether the stunts are successfully pulled off or go down in flames, they usually succeed in getting the celeb talked about.

One showbiz personality who has courted controversies is Wendy Shay. The RuffTown signee is in the news again and some folks are wondering if a kidnap prophecy about her is real or just a publicity stunt.

The prophet whose name is mentioned as Akwasi Appiah, popularly known Jesus Ahuofe, is seen in a viral video predicting the kidnap of Wendy Shay before the year ends.

The prophet added that Wendy Shay would be killed for ritual purposes. He claimed in the video that Wendy Shay was put in a small room, where the said rituals were done, after which her body was left to rot.

He admonished people close to her to warn her to repent from her lifestyle or she would not see the end of 2020.

Chief Executive Officer (CEO) of Rufftown Records, Ricky Nana Agyemang, otherwise known as Bullet, in an interview with Zion Felix revealed that his camp was informed of a plot to kidnap Wendy Shay in December last year.

According to Bullet, the prophecy came as a reminder from God and as such Ghanaians should not take it lightly.

Fast forward, days after the release of the infamous video, the ‘Uber Driver’ hitmaker was spotted in the church of the prophet detailing how the kidnap prophecy came as a confirmation to her family and that of her record label.

Whiles a lot of questions are being asked as to whether it was prudent for the singer to have visited the Newlife kingdom Chapel, GhanaWeb has put together two analogies.

The prophet in the viral video did not request to see the Rufftown Records artiste but only admonished her to change her lifestyle to avoid being kidnapped.

Just after the prophecy went viral, Wendy Shay took to her social media pages to request for the contact of Prophet Akwasi Awuah. Days after the popular search, Wendy Shay is now spotted in the church.

Not only that, but her team goes ahead to film why she went to the church. Finally, in showing off to the public, she posted the video on her Instagram page with the caption, “…Indeed God reveals to redeem ..it was an honor to worship with Prophet Akwasi Appiah at Newlife kingdom Chapel

Is it a Rufftown Record’s strategy in promoting Wendy Shay ahead of an upcoming release or it was just a leap of faith meeting?

What congressional Democrats can learn from state legislatures