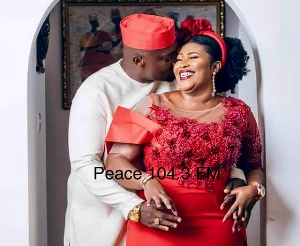 Chief Biney is getting married to Afia Akoto today

A Binduri ‘latrine man’ who is a sympathizer of the largest opposition party the National Democratic Congress (NDC) Stephen Atubiga has warned his party not to allow its Deputy National Organizer Chief Biney to sit in any sensitive meeting of the party.

His admonition follows news of the marriage arrangement between MASLOC’s Afia Akoto and Chief Biney who is also the Deputy National Organizer of the NDC.

Spelling Biney as ‘Banni’, Atubiga while congratulating the deputy national organizer of the NDC “chief Banni” for finding his soulmate, said that politics and love cannot mix.

“The heartbeat, strength, and strategy of winning 2020 or election for NDC, is in the hands of the national organizer and his deputies. There is no room for family, love or stomach when leading us (NDC) as a national executive for (war) elections while wining and dining with our opponents ( enemies). The party is very naked now my people.” He wrote.

In consultation with most stakeholders, party executives and members of the party, it will be in the party’s interest for chief Banni to resign from his position or the leadership of the party protecting the party’ by relieving him from his post entrusted to him by us. ( party members)

The heartbeat, strength, and strategy of winning 2020 or election for NDC, is in the hands of the national organizer and his deputies. There is no room for family, love or stomach when leading us (NDC) as a national executive for (war) elections while wining and dining with our opponents ( enemies). The party is very naked now my people.

Chief Banni should not be allowed in any national meeting at the national level, Fegg, security or any strategic meeting in the interest of 2020 victory for JDM/ NDC. Alotey Jacob and co are far less dangerous for jdms victory as ordinary members, then the strategic seat and position my brother chief banni holds for the party, and going with it into this dangerous relationship against the party’s interest. The Afia Akoto I have known, will never let Her NPP down for any man or love. Especially for JDM she has insulted, called JDM names till date. Well.

I am calling on all NDC members to help protect and project the NDC party from where we love, where we eat, and how we make friends in the interest of the party.

We have positioned some grassroots to storm the party office, anytime chief banni is in attendance of any meeting at the headquarters. To make sure he is not pat of the meeting.

And for the safety of all national executives during Fegg or any strategic meeting of NDC involving( former national deputy organizer chief Banni, blame yourselves when blood is spelling to protect the party’s nakedness. the party is bigger than atubiga, The part is Paramount including who I chose to befriend, play or get married to when leading and holding a strategic position.

Chief banni has the right to marry whoever he wants as a Ghanian and as human, he can even marry Nana Addo’s daughter, don’t get me wrong. The problem is the position he is holding, and WHO he is marrying to is very dangerous to the NDC party as a whole. We can’t afford for the sweetness of Afia Akoto to keep us in opposition with own secret through her husband. chiii, chiii, chii, mmbano. Very dangerous to JDM and /NDC.

This 2020 elections victory for JDM is a war, Nation rescue movement, boot for boot. no room for games. Either you are ready to help JDM / NDC win power, or stay in your lane for your safety.

Over to you JDM, there are more tractors as I have been telling you to sit up. as the leader of the NDC, Use the power given to you to give us victory, or you allow others to use their powers to keep us in opposition.

Justice and protection for NDC’s secrets.

I've forgiven you for tagging me a "two-minute" man