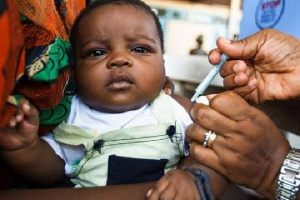 A baby being vaccinated

The Ho Municipal Health Directorate is to embark on a week-long Inactivated Polio Vaccination (IPV) campaign in the Municipality, beginning Wednesday, February 19, 2020.

A letter signed by Miss Victoria Kpelly, Acting Municipal Director of Health Services, and copied to the Ghana News Agency (GNA) said the National Immunisation Days (NIDs) of the vaccine formed part of strategies aimed at eradicating the polio disease.

She said the catch-up campaign would shield more than two million children unvaccinated against the type two poliovirus, which remained a “highly infectious” disease.

“Poliomyelitis is a highly infectious disease that cripples children and even kills them. The Inactivated Polio Vaccine catch-up campaign is necessary to protect the over two million children who do not have protection against type 2 poliovirus and also increase the population’s immunity against polio”, Miss Kpelly said.

During the immunisation days, vaccination teams would be available in the communities, notably at health facilities and weighing centres, to inoculate children 21 months to four years old.

Vaccination teams would also be present at schools and commercial centres including markets and lorry stations to serve the vaccine.

“The inactivated polio vaccine is safe, free and will be given on the left upper arm of all eligible children by trained nurses”, she said.

The exercise is in collaboration with the Ho Municipal Assembly and expected to end on Tuesday, February 25, with calls on parents, guardians and the public to take advantage of the campaign.

My issues with OGB Music resolved