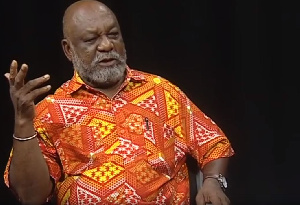 Renowned communications professional, Prof Kwame Karikari, says listening to morning shows on various media platforms in the country is a waste of time because they do not enlighten the citizenry on issues.

According to him, these shows give the platform to politicians who only come to argue about issues without necessarily educating listeners.

“…political pundits from the political parties who go on these programmes, they are not enlightening even the followers of their own parties about the policy issues they appear to be handling”

He said this has become the trend because people go into politics for the power and other benefits and not necessarily to make a change.

“It is banal. If it is party A or party B you don’t really get a difference in terms of the quality of discussion they are having but it is not surprising because the political parties we have now and the people who go into politics are not into politics for social change. They are in politics more for political power and the things that accrue for it, so they’ve abandoned any commitment to enlighten members of their parties even to the so-called ideological principles that they espouse so they can’t go on radio stations and make us think better than we do.”

The former executive director for Media Foundation West Africa (MFWA) who was speaking on ‘What is Next’ with Rev Dr Kwabena Opuni Frimpong, added that persons seeking to learn shouldn’t waste their time listening to morning shows as they have nothing positive to offer.

“Listening to most of those morning show programmes is a waste of time because they don’t enlighten you about any policy, they don’t educate you… all you hear are those for the existing government defending what the government is doing and those on the other side just attacking or condemning.”