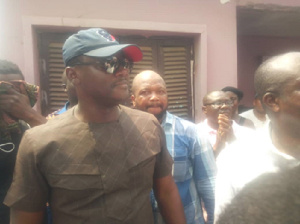 Dr. Samiu K. Nuamah, Member of Parliament (MP) for Kwadaso, has expressed optimism about his reelection in the upcoming primaries of the New Patriotic Party (NPP), urging the party delegates to rally solidly behind him for a resounding victory.

“Kwadaso is noted for kicking out MPs after their first term, but this time, the status quo ought to change,” he remarked, saying there was the need for continuity in progress.

The party, he said, should always close its ranks and strive for unity of purpose, doing away with all differences and personal interests for sustainable development and growth.

Dr. Nuamah, in an interview with the Ghana News Agency (GNA) at Kwadaso, after presenting his nomination forms at the party office, observed that, the NPP’s vision was to build a prosperous Ghana.

Therefore, the party must focus on its vision and development agenda devoid of utterances and actions likely to distract its attention.

The Kwadaso MP cited refurbishment of the party office, educational development and introduction of youth-friendly programmes as some of his achievements so far in his first term of office.

He has also embarked on several mentorship projects designed to encourage the youth to strive for excellence in their respective fields of endeavour, while contributing significantly to the creation of the Kwadaso Municipality.

Mr. Yaw Bonah Boadi, Kwadaso NPP Constituency Chairman, who received the forms, advised the party faithful to work hard in ensuring massive victory for the party in the 2020 General Election.

Present at the ceremony were party delegates, supporters and executives.

You're a 'retired magician' who conjures numbers to confuse public

African universities and the influence US foundations have on them

US tries to counter China’s influence in Africa. Is it too little, too late? – South China Morning Post

'Recipe for a Massive Viral Outbreak': Iran Emerges as a Worldwide Threat

Gays, Lesbians and affiliates to hold first ever international conference in Ghana in July