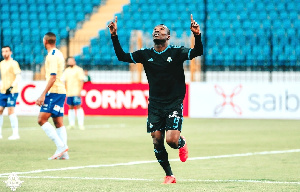 Ghanaian striker John Antwi scored the only goal as Pyramids FC edged Ismaily FC to advance to the semi finals of the Egyptian Cup.

The prolific Ghanaian forward started the crunchy quarter final clash for his side against ‘The Brazilians’.

He shot Pyramids FC ahead as early as the 6th minute and they eventually held on to their slim margin lead to secure qualification to the next round.

Pyramids FC will next face Tala’ea El Gaish SC in the quarter finals of the Egyptian Cup.

John Antwi currently has 2 goals in 2 cup games for Pyramids FC and has 8 goals so far this season.

'What Rev Martey said about the Church and Politics' - Bible Society: Ghanatoday.net

Opinion | Political Incompetence Can Be as Deadly as Covid-19