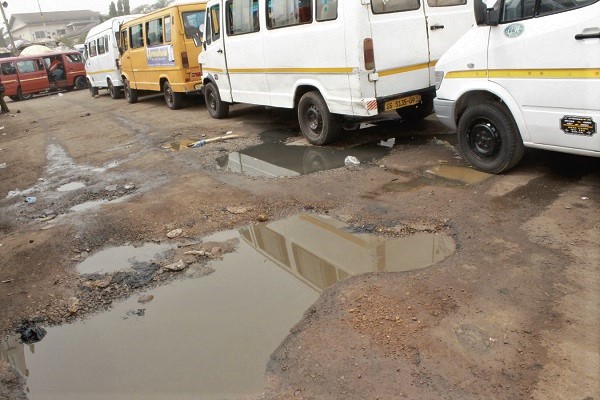 Some faecal matter at portions of the lorry station. Picture: Lydia Essel-Mensah

A broken septic tank at the 37 lorry station in Accra has spilled its content into portions of the station, creating an eyesore and posing a health risk to the travelling public and traders at the station.

Apart from the stench emanating from the lorry station, the flowing sewage containing excreta is so unsightly and leaves a bad taste in one’s mouth.

The Daily Graphic visited the lorry station as part of its campaign on sanitation, and found that the spilled sewage was proceeding from the main public lavatory at the station, close to which was parked some ‘trotro’ vehicles.

As if that was not enough, the public lavatory itself had its exterior looking somewhat neater than the interior. Even though the facility was said to have been cleaned in the morning of the visit, some toilet seats were soiled with faeces.

A sewage channel behind the toilet building leading to the septic tank was also broken, exposing the raw sewage in it.

All the while, the main septic tank that was spilling refuse water was surrounded by traders who were busily going about their activities.

In fact, one of them said: ‘‘Madam, this is what we do to feed our families. We have nowhere to go, we take medicines to keep us healthy.”

A part of the septic tank that was broken and was, thus, letting out faecal matter had been covered with rags and a plastic bucket in an attempt to contain the solid and liquid waste.

Mr Yaw Amoako, the Vice Chairman of the Ghana Private Road Transport Union (GPRTU) at the 37 lorry station, said the drivers paid daily tolls to the La Dadekotopon Municipal Assembly (LaDMA), yet sanitation at the station was not satisfactory.

‘‘Our refuse dump was once full for several months and we could not stand the stench. It had to take UTV to do a story on it before the assembly was pushed to come and clear the refuse just a day after it was published.

According to him, besides the challenges they were facing with emptying rubbish bins and the septic tank, drainage facilities at the lorry station were also an issue as they had become choked.

He said drains had been placed underground but they had become exposed with time and choked with rubbish such that there was flooding anytime it rained.

Mr Amoako appealed to LaDMA to build a modern toilet facility for the lorry station since the facility they were using now was too old and not fit for use.

He said any delay in constructing a new lavatory for the 37 lorry station could see the septic tank blasting and spraying its contents on passengers at the station.

When reached for his comments, the Municipal Chief Executive for LaDMA, Mr Solomon Kotey Nikoi, said the assembly had begun renovating public toilets in the municipality and it would get to the 37 lorry park very soon.