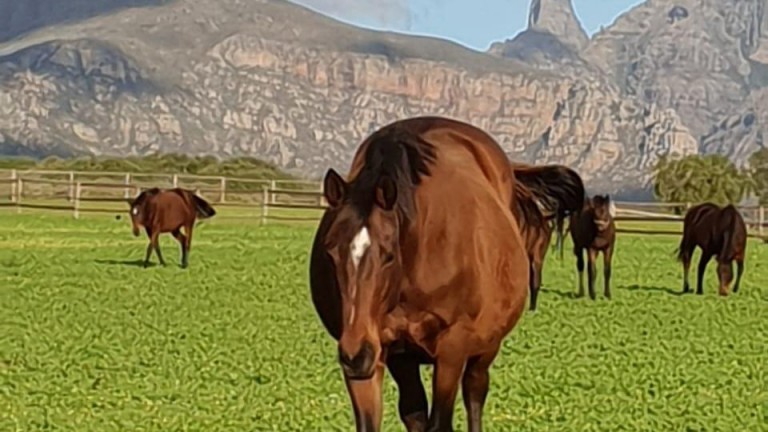 South African broodmare Halfway To Heaven took another step towards blue hen status as Golden Ducat became her third Grade 1 winner from as many foals with victory in the ARF Commemorative Cape Derby at Kenilworth on Saturday.

The previous two offspring of the dam, a 12-year-old daughter of Jet Master owned by Wilgerbosdrift and Mauritzfontein, are Rainbow Bridge, a five-year-old gelding by Ideal World who was successful in the WSB Champions Cup and Sun Met, and Hawwaam, a four-year-old colt by Silvano who has landed the Premier’s Champions Challenge, South African Classic and Daily News 2,000.

Golden Ducat, a gelded son of Philanthropist trained by Halfway To Heaven’s one-time handler Eric Sands for Wilgerbosdrift, was sent off a 10-1 shot for the Cape Derby over ten furlongs, having finished fourth in a Pinnacle Plate over seven and a half furlongs at Kenilworth last time out.

It was only the fifth start, and first beyond a mile, for the chestnut who races for his breeders after injuring a hock as a young horse.

Sands said after the race: “Halfway to Heaven has been very good to me. I’m not sure if what she’s done has been done before and if it will be done again.

“I’ve won the Derby before with an immature horse, avoiding feature races with a light prep. He was prepped in a Pinnacle Plate and ran way above his rating.”

Halfway To Heaven’s ascent to brilliant broodmare is all the more remarkable for her history.

As detailed in a Racing Post article by Michele MacDonald last year, she nearly drowned in a flood, later injured herself crashing through a poll fence and on yet another occasion got loose in a vineyard and lacerated herself on wires.

Halfway To Heaven has a two-year-old filly by Silvano named In Limbo and a yearling colt by the same sire called Celestial City. She has a Querari foal at foot.

The mare, a Grade 3 winner at Kenilworth herself, is out of the unraced Rambo Dancer mare Pas De Basque, who in turn is out of the Listed-plaed Our Elegant Girl, a daughter of Our Casey’s Boy, a Grade 1-placed son of Blushing Groom.

From Hokkaido to Brittany: Bande joins the ranks of French jumps sires

Breed-shaping sire and Horse of the Year A.P. Indy dies in Kentucky at 31

Hong Kong protests: It's not the economy, stupid, it's the politics