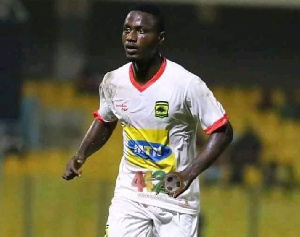 Mercurial midfielder Mudasiru Salifu has been included in Asante Kotoko’s list of players making the trip to the UK, for the Independence Day clash with arch rivals Hearts of Oak, FootballMadeinGhana can exclusively confirm.

Mudasiru has not played for the club since coming off injured in a premier league game with Hearts of Oak last month but Coach Maxwell Konadu has named him among his 31 man contingent.

The 22 year old was initially set for 4 weeks on the sidelines and the latest development indicates he has accelerated his recovery.

The influential midfielder has started training and was on the bench for his side when they played Aduana Stars on Sunday.

Kotoko will face Hearts of Oak outside the shores of Ghana for the first time in history and this makes the game very special.

The match will be played in London at the Barnett Stadium on March 7th.

IMF, World Bank are wrong Africa is piling on too much debt — Quartz Africa