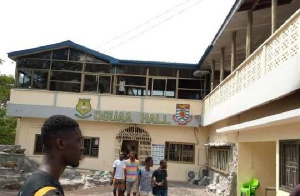 About 10 students were injured from the Oguaa Hall celebration

The Week Celebration of the Oguaa Hall, University of Cape Coast, turned violent Saturday dawn leaving about 10 students with varying degrees of injury.

The students, who got injured during the clash at the forecourt of the Oguaa Hall, are receiving treatment at the University Hospital.

The incident occurred early Saturday leading to the destruction of property including motorcycles, glass doors, poly tanks and other personal belongings. Part of the roofing of the Oguaa Hall was also burnt.

An eye witness, who pleaded anonymity, told the Ghana News Agency that the cause of the brawl was not immediately known but saw some students, believed to be from the Atlantic Hall, pelting stones at the Oguaa Hall students, who also retaliated.

The eye witness said the attack got serious with some students getting stabbed, while others run to seek refuge elsewhere.

The source disclosed that a team of police and campus security personnel intervened and restored calm.

As at 1330 hours on Saturday, the police team were seen patrolling the Campus.

The GNA saw bloodstains, sticks, broken glasses of doors and windows scattered at the entrance of the Oguaa Hall.

Meanwhile, the UCC Authorities are said to be in an emergency meeting over the incident.

Expanding the travel ban to Africans is an election ploy

Expanding the travel ban to Africans is an election ploy

Take your Peace FM, NDC will never return to that overhyped station