Car dealers to protest if negotiations with government fail-Ghanatoday.net 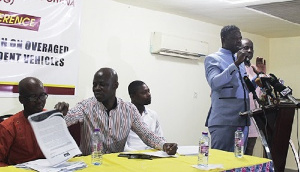 If negotiations with government over the ban on importing some category of second-hand and salvaged vehicles fails, we will hit the streets, says the Automobile Dealers Union Ghana (ADUG).

The Majority Leader in Parliament, Osei Kyei Mensah Bonsu, recently revealed government’s bid to put in place a regulatory framework for the importation of ‘second-hand’.

According to him, it will be done through the Customs Amendment Bill which is on the agenda of Parliament for consideration.

Speaking to GhanaWeb, executive member of the Automobile Dealers Union Ghana Nana Kofi Yankah said, his outfit is awaiting a date from stakeholders for possible negotiations on the intended ban.

However, he stated a possible protest if government fails to address their concerns.

“We are waiting for a date so we sit and address our concerns. If our concerns are not considered we will demonstrate. We have done it before. We did it with the luxury tax introduction and our concerns were listened. I am positive that our issues will be sorted out.”

Parliament is set to put in place a regulatory framework for the importation of second-hand and salvaged vehicles.

The Majority Leader, Osei Kyei Mensah Bonsu, indicated that such a regime is necessary for the emerging automobile industry. He made this known at an encounter with the media earlier this month.

He believes that these imported vehicles “are the reasons why we have so many accidents on our roads.”

Meanwhile, Ghana has opened doors for automobile companies to set up their operations in the country.

In 2018, German car-maker Volkswagen announced plans to set up a plant in Ghana as it continues to expand across Africa.

German car-maker is set to open an assembling plant in Ghana in early 2020.

Volkswagen already builds vehicles in Kenya and recently opened another car plant in Rwanda as part of its expansion project in East Africa.

'Corrupt' FDA to be exposed in serious documentary

We don't have money in our pockets and you're talking 'toilet'

Buddy, can you spare a dime? Echoes of ’30s in viral crisis

Trump says he may impose quarantines, send off Comfort