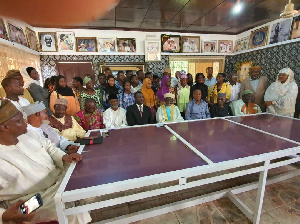 The students were drawn from various deprived communities in the country

Forty students from various deprived communities (including Zongo Communities ) who have been granted full scholarship by the government of Ghana to study medicine in Cuba, have called on the National Chief Imam, Sheikh Osman Nubu Sharubutu and the Council of Zongo Chiefs to bid them farewell and seek their blessings ahead of their departure to Cuba this month to begin their studies.

The entire 40 medical students, drawn from various deprived communities across all regions in the country, were introduced to the Chief Imam, the Council of Zongo Chiefs, as well as representatives of the various Islamic sects in the country; Ahlusunnah, Shia and the Ahmadiyya Mission during the ceremony held at the Office of the National Chief Imam in Accra.

Speaking at the ceremony on Monday, Minister of State at the Office of the Vice President, Hon. Abubakar Sadique Boniface said the special scholarship scheme, is part of the Akufo-Addo government’s policy to develop human capital in deprived communities through education and training.

Hon. Boniface said one of the most important reasons why the government of President Akufo-Addo established the Ministry of Inner Cities and Zongo Development is to ensure social development in the Zongos and inner cities, especially in the area of education.

Hon. Boniface added that the decision to grant scholarship to 40 students from these communities to study medicine in Cuba, is an important statement of intent on the part of the government and an attestation of the government’s commitment to keep its promises.

“Today it is known and everyone can attest to the fact that the government made a promise and it has fulfilled the promise,” Hon. Boniface said.

“Sending 40 students to Cuba to study medicine is further testament to the fact that this government is a government which fulfills its promises.”

The Chairman of the Advisory Board of the National Chief Imam, Alhaji Gado Mohammed underscored the value of education and expressed delight and gratitude to the Government for the opportunity granted the youth of deprived communities.

“We are gathered here because of education and education is very important for the progress of our community,” Alhaji Gado said.

“We have capable young men and women who are lucky to have been given scholarships by the government which some day will help them to become the cream of the deprived and Zongo Communities.”

“To get the opportunity to train to become a doctor from our community is a big opportunity so you should seize this opportunity and make good use of it for the benefit of society.”

We pray to the Almighty Allah to guide you so that you can return and become useful resource to our communities and the country.”

A Deputy Minister of Education, Hon. Yaw Adutwum expressed gratitude to President Akufo-Addo and Vice President Bawumia for their vision for education, which he said he was proud to contribute towards the realisation of the government’s vision on education.

The Deputy Education Minister urged the students to take their lessons seriously so that one day, they can tell their stories and thank President Akufo-Addo and Dr. Bawumia for the opportunity, as well as use their story to also inspire others.

Also present at the ceremony was Board Chairman of the Zongo Development Fund, Rear Admiral Miniru Tahiru (rtd).

The Head of the Scholarship Secretariat, Kingsley Agyemang noted that the selection process to determine the final 40 students to benefit from the scholarship was done under stringent process which ensured the best from across the country were chosen.

He, therefore, urged the students not to play with the opportunity the nation has offered them.

“You are the best we chose from many other qualified students, so don’t disappoint the nation,” he adviced the students.

Vice President Bawumia brokered the deal with the Cuban Government during his state visit there last year for 40 Ghanaian students from Zongo Communities to benefit from government scholarships to study medicine in Cuba.