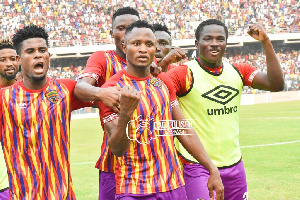 Hearts of Oak have sailed through to the Round of 32 of this season’s MTN FA Cup competition after defeating Danbort FC 2-0 this afternoon at the Accra Sports Stadium.

The Ghana Premier League giant played as an away team to the Lower Division side in a Round of 64 clash to seek progression to the next phase of the converted competition which has provided excitement in the past editions.

Paying as the home team at the Accra Sports Stadium know to be the home venue for the Phobians in the Ghana Premier League, Danbort FC was totally dominated in the first half as they were forced to chase the game for most parts of the match.

Following a series of dangerous attacking plays, Hearts of Oak finally took the lead on the 25th-minute courtesy an equalizer from midfielder Frederick Ansah Bocthway. That goal separated the two teams at the end of the first half with the Rainbow lads well on their way to victory.

After resuming from recess, it was more of the same in the second half as Coach Edward Nii Odoom’s team continued to outplay their opponent.

Later on the hour mark, Danbort FC goalkeeper Marfo committed a blunder with an air kick which gave Hearts of Oak’s poster boy Joseph Esso with the goal at his mercy. The attacker gladly took advantage and slotted the ball into the back of the net to hand his side a 2-goal lead.

He’s not NPP – Chairman petitions against parliamentary aspirant in Bekwai