Mr Ankomah sued Taylor and his firm, Loud Silence Media and demanded GH¢10 million as damages for dragging his name in the mud.

Kevin Taylor, through his productions company, ‘Loud Silence’, has been releasing weekly video documentaries dubbed ‘With All Due Respect’ on controversial issues which are then circulated on social media platforms.

He accused Mr Ankomah in one of his videos of allegedly being involved in a scheme by a Dubai-based minerals firm, and some top members of the New Patriotic Party (NPP) government of planning to destroy the CEO of embattled Menzgold, Nana Appiah Mensah also known as NAM1.

Mr Ankomah subsequently filed the defamation suit, and said the allegations made against him were malicious and have brought his hard-earned reputation into “hatred, ridicule, Obloquy, discredit, contempt, vilification, reproach, great distress and emotional trauma”.

Mr Ankomah was present in the court presided over by Justice Kweku T. Ackaah-Boafo and was represented by Mr Thaddeus Sory with Marie-Nicole Poku.

Mr Taylor on his part was, however, absent was also not represented in court.

The Accra High Court on Monday February 24, 2020 gave its judgement and ordered the United States-based political commentator to pay the damages for defamatory comments made on his social media programme dubbed ‘With All Due Respect’.

COPY OF JUDGEMENT ATTACHED BELOW

The court described Taylor’s comments as “cavalier” and said that when the plaintiff [Ace Anan Ankomah] called his bluff and dared him by suing him, Taylor did not “have the cojones to respond” in spite of him [Taylor] creating the impression of being able to appear anywhere to defend his “bombastic video.”

The court held that it had jurisdiction in the matter because, although the defendants are outside Ghana, the defamatory matter was intended to be shared in Ghana, received considerable interest in Ghana, was downloaded in Ghana where the plaintiff has ties, and that injury to the plaintiff in Ghana was foreseeable.

The court further held that it was the proper forum and had jurisdiction.

In awarding that extent of damages, the court took into consideration how widely the video’s “outrageous and malicious” contents were circulated, the insults to the plaintiff by other persons following the publication of the matter (naming some of those persons), Taylor’s “malevolence,” “spite,” and his “reprehensible conduct” and “egregious conduct” and held that, that “offends the court’s sense of decency.” 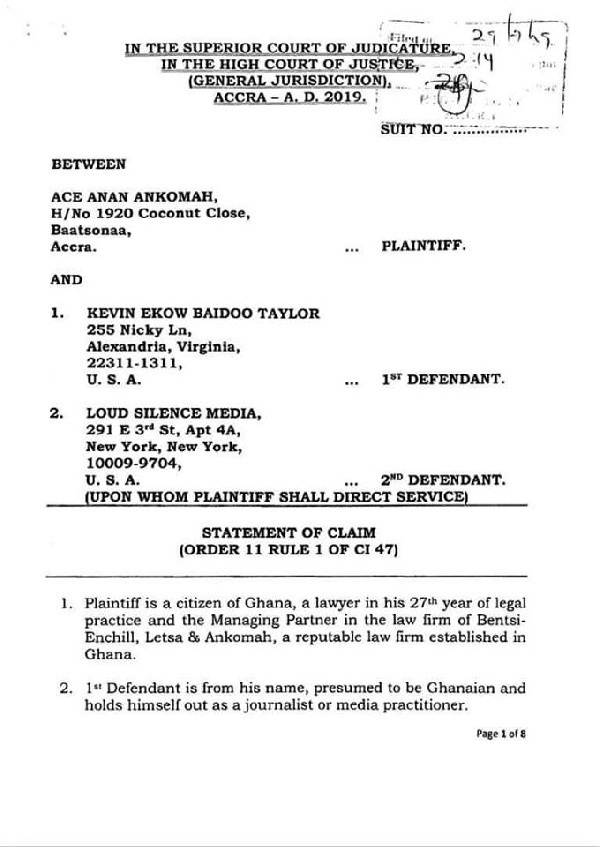 Writer’s email: This email address is being protected from spambots. You need JavaScript enabled to view it.

The world of work - Springboard discusses the past, present and future-Ghanatoday.net