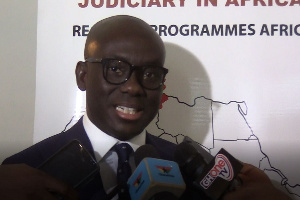 Deputy Attorney-General, Godfred Yeboah Odame has lamented the continuous silence of some key former government officials who played pivotal roles in deals and agreements leading to the Airbus scandal.

According to him, since the news about the 31st January crown court ruling broke, he expected some former appointees to duly respond and clarify issues but that hasn’t been the case.

He said given the provision of integrity and accountability in governmental practices, it would only be fair if the appointees in question responded to the several rebuttals and misconceptions in the media about the issue.

While speaking in an interview with GhanaWeb on the sidelines of the opening ceremony of a two-week training for Ghanaian lawyers, Monday, February 24, 2020, Mr Odame said; “…Now in this situation, we find ourselves in is that Ghana has been scandalized in this Airbus scandal which judgment was given in January and I’m saying there’re key government actors who supervised such transactions, they’re still around…”

“…There was a vice president at that time, the vice president subsequently became a president. There was a minister for defence, there was an attorney general and indeed the pitches of the aircraft couldn’t have occurred with it escaping the attention of such key government actors. That is why I think that there’s a need for ex-government officials to demonstrate proper fidelity to accountability by answering certain questions…,” he concluded.

However, following the wide reportage of the scandal, some key officials who served under the erstwhile Mills/Mahama reacted.

Key of such personalities include the former Attorney-General, Marietta Brew Appiah-Oppong who was appointed in 2013 under the Mahama administration. She denied allegations that officials of aircraft manufacturing giant Airbus paid or attempted to pay millions of dollars in bribes in exchange for contracts.

The National Democratic Congress (NDC) who were in power then also denied the several allegations that had been levelled against its leaders.

CPP calls for the return to Progressive Values

Trump says he may impose quarantines, send off Comfort

Coronavirus shows the merits of being a career politician