By Ariel Zilber For Dailymail.com

President Trump on Sunday touted his record with African Americans, saying he has done far more for blacks than ‘any other president’ and that ‘Crazy Bernie (Sanders) and the Democrats’ should take note.

‘Crazy Bernie and the Democrats should see this,’ the president wrote in the caption.

‘I have done far more for the African American community than any President. 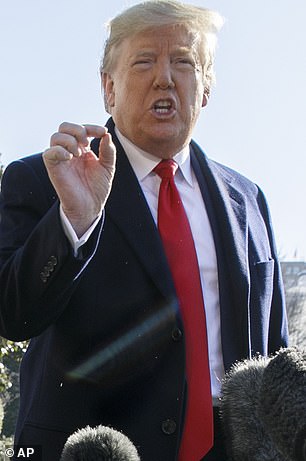 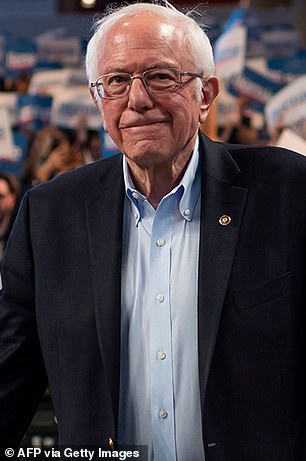 President Trump (left) on Sunday touted his record with African Americans, saying he has done far more for blacks than ‘any other president’ and that ‘Crazy Bernie (Sanders) (left) and the Democrats’ should take note

The president on Sunday subtweeted a video posted to Twitter which shows the release from a federal prison of a black man, Clinton Stewart

HBCU is the acronym which stands for historically black colleges and universities.

The video shows the release from a federal prison of a black man, Clinton Stewart.

Stewart was released from a Colorado penitentiary in January after serving time in prison for financial offenses.

Video on social media shows several of his supporters holding up signs in praise of Trump and crediting him with Stewart’s release.

The clip interviews a woman who identifies herself as Stewart’s daughter.

She praises Trump, crediting him with the release of her father.

Later in the clip, Stewart is seen getting out of a car outside of the penitentiary and leading a chant of the president’s name.

Thank God for President Trump and the First Step Act,” Stewart said. “President Obama had an opportunity to help us out, he refused.”

In December 2018, Trump signed into law the First Step Act.

Passed by overwhelming majorities in Congress, the First Step Act stands out as a rare bipartisan achievement in an era of sharp political divisions.

Trump has invited ex-offenders to the White House and his State of the Union speech.

The law allows inmates who are serving time for selling crack cocaine to ask a judge to reduce their prison sentences.

It’s a belated recognition, supporters say, that tough-on-crime policies that required lengthy prison terms for crack dealers were too punitive and fell most heavily on African Americans.

Sanders, the senator from Vermont, is riding high after his victory in the Nevada Caucuses on Saturday.

Governance And Leadership; The Mystery Of Africa's Underdevelopment

Governance And Leadership; The Mystery Of Africa's Underdevelopment

Engage in fasting and prayers to suppress your libido- Maame Dokono advises: Ghanatoday.net

What Bihar will tell us about national politics – columns