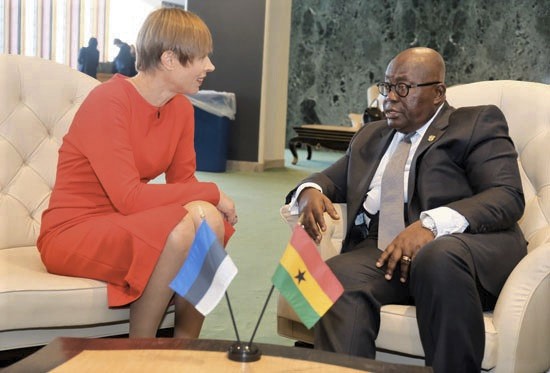 Monday, February 24, 2020 marked the 102nd anniversary of the declaration of independence of the people of Estonia.

The day is so significant to Estonians, who had for centuries dreamed of establishing a state free from foreign domination.

So since February 24, 1918 when the Salvation Committee (Päästekomitee) declared the independence of the Republic of Estonia, the day has always been observed with a number of activities, including wreath-laying ceremonies, parades at Tallinn and indulging in traditional Estonian dishes.

Speaking to the Daily Graphic in an exclusive interview on the occasion of their independence, the Consul General of Estonia, Mr Nabil M. Basbous, said Estonia had a solid health insurance system and ensured the same quality of care for all insured people regardless of age, income or health risks. Additionally, he said citizens with disabilities received social allowance through the Estonian Unemployment Insurance Fund.

Estonia, he noted, had a very small homeless population, adding that the Foundation Abbé Pierre and Feantsa estimated that around 1,371 Estonians were homeless.

Lodging shelters, homeless shelters and resource centres had stepped in to help those who were indeed homeless, especially in the most populous city in Estonia, Tallinn, where there was the most need for that aid, he added.

Although the life expectancy rate had vastly improved, he said, it still lagged behind the average of the European Union (EU).

The consul general announced that Estonia became a temporary member of the United Nations Security Council this year and would remain on it for the next two years.

He said Estonia joined the euro and became the first ex-Soviet republic to join the eurozone in 2011.

In 2011, he said, the World Bank rated Estonia 21st on the Ease of Doing Business Index.

The country was also ranked 12th out of 162 countries in the Index of Economic Freedom 2008, the best of any former Soviet republic.

He referred to the Organisation for Economic Co-operation and Development (OECD) index, which puts the average Estonian household net-adjusted disposable income per capita at $18,665 a year.

The consul general noted that about 94 per cent of Estonians were insured, stating that those uninsured did receive emergency care, as well as take part in other public health programmes and treatments in which the national or city government provided compensation or free care.

Bus transportation was free for Estonian citizens as long as they were located in a territory that had accepted national government funds to do so, he noted, saying that had made travel from outer regions to urban centres such as Tallinn very affordable, if not free, allowing for more movement of people, as well as funds.

Estonian productivity is experiencing rapid growth, and consequently wages are also rising quickly, with a rise in private consumption, he added.

Mr Basbous said Estonia had one of the highest levels of educational attainment, with 90 per cent of people in the age group of 25 to 64 years having completed upper secondary education.

Estonian women, he stressed, also performed exceedingly well in tertiary education, with 45 per cent of them completing the third level of education, compared to 28 per cent of Estonian men achieving the same feat.

Email: This email address is being protected from spambots. You need JavaScript enabled to view it.