I have done well to deserve another term – Akufo-Addo raps: Ghanatoday.net 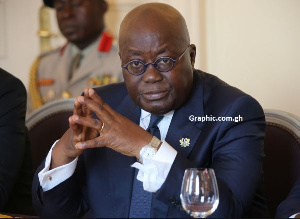 While counting down his achievements over the past three and half years in an interaction with some Ghanaians in Oslo, Norway, the president said his chances of emerging victorious in the upcoming December 7 general elections is a done deal because he has been a good servant.

“That’s the basis of which I’m going to ask four more for Nana. I’m very confident that when it comes to the day of accounting on the 7th of December the Ghanaian people will say “Nana you’ve done well, thank you, continue. Because I know the work is being done and it’s being appreciated,” the president said.

According to him, his works since assuming office as president is a tremendous indication that he deserves one more term in office.

“…I will say that looking at the legacy that we inherited, an economy that was going at the lowest it had been for nearly two decades, highly indebted country, strangling under debt in nearly all areas. In the energy sector, in the education sector in the health sector,” he added.

The president continued: “Our National Health Insurance Scheme which was a great legacy of President Kufour was virtually moribund, our energy sector equally compromised by heavy indebtedness which brought about dumsor phenomenon…and the sluggish economy low wages, high inflation. We inherited a fiscal deficit of 9.3%…All of these are indicators that the economy…has been put in a really sound place.”

He described the former phase of the banking sector under the erstwhile Mahama as “poorly managed with poor governance practices.”

We won’t pay you now – Gov’t to customers of Gold Coast, AllTime, other closed fund managers

From vision to reality: The journey towards cognitive and zero touch network operations-Ghanatoday.net