Why girls in Paala are pushed into early marriages: Ghanatoday.net 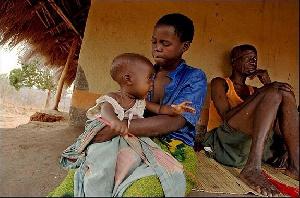 Girls in the Paala community in the Wa West District of the Upper West Region have resorted to early marriages due to their inability to access schools in their locality.

The girls have to commute long distances to other communities to attend basic school, which posed a challenge to many of the girls who chose to marry early, some at tender ages.

A resident of Paala told the Ghana News Agency (GNA) in an interview that because there was no school in the community, young girls were marrying at early age; one married at age 17 and another married at age 15, while many of them were also dropping out of schools.

Madam Seonkomo Nyigna, said the situation was a source of worry to parents, especially mothers whose children were lacking behind in education.

Paala, a remote predominantly farming community with a population of more than five hundred, had been bedeviled with numerous challenges including inadequate source of potable water, poor access to health care and lack of roads.

Madam Martha Seonkomo, another resident of the community, indicated that children of school going age sat idle at home because there was no school in the community.

She said the children in the community attended school at the Bienye community, which was several kilometers away from Paala.

“There are many children who are not going to school because they cannot walk to the community where the school is located. They pass two communities before they get to the school,” Madam Seonkomo explained.

“Children, who had the courage to start school, had all dropped out along the line due to the distance from the community to the school.

“Our children and siblings want to go to school but they can’t go because the school is not close to the community,” she said.

The residents gave the assurance that they were ready to provide land and labour to build a school for the community, and appealed to the government, benevolent individuals and Non-governmental Organizations to support them with building materials such as cement and roofing sheets.

Mr Badia Zimbe Yussif, the Assembly Member for the area, indicated that improving education was one of his priorities and said he would lobby for a school for the community.

He observed that the challenge in accessing education at Paala was compounded by the lack of road network, which cuts off the community from other communities during the rainy season.

Meanwhile, the United Nations Sustainable Development Goal Four (4) enjoins member states signatory to those goals to ensure inclusive and equitable quality education and promote lifelong learning opportunities for all by 2030.

Climate change: Why are tomato prices in Africa increasing?

Climate change: Why are tomato prices in Africa increasing?

Top viral news of the week: Man spotted with Python mask to a desi welcome for puppy