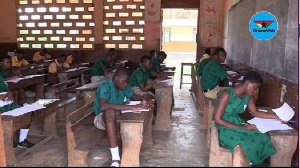 The performance of students in the Basic Education Certificate Examination, BECE, in Akuapem North Municipality of the Eastern Region, continues to decline.

Available statistics from Ghana Education Service indicate that a total of 1064 candidates representing 38.1% of 2,708 Candidates who wrote the 2018 BECE examination failed.

These poor performance recorded over the years informed a Non-Governmental Organization, As- I –Grow (AIG) to organize intensive classes for about 800 BECE Candidates in Larteh, Akropong and Mamfe under its initiative dubbed “My Career Campaign Project”.

The classes brought together Examiners from WAEC who took the students through technicalities and methods of answering examination questions in subjects such as Mathematics, English, Integrated Science, Social Studies and ICT.

The Chief Executive Officer of the NGO Debrah Bekoe told Starr News “we glanced through the performance of Candidates in Akuapem North from 2015 to 2018 and we saw that performance of students keep declining. In 2018, when you pick Larteh, the school which performed well was on 30th position, others were in 60th position.”

“For almost six years now, No candidate has scored aggregate 6. We noticed that most of the students do not know the technicalities in answering Examination questions aside their own weaknesses. So AIG decided to bring these examiners here to facilitate and take these candidates through so that they will be able to pass.”

Some of the Teachers and WAEC Examiners who took the students through various rudiments of answering examination questions told Starr News that, what they have observed is “that not that the students can’t answer the questions but some of the basic things they have to do in the presentation of the answers is where the Challenge is. For instance, in Mathematics how they label the Venn diagram, how they plot their graph, how they arrive at answers are all challenges. Mathematics demands a step by step solution.”

Some of the beneficiary candidates preparing to sit this year’s BECE said the exercise has been beneficial.

“I was having challenges in some of the topics in Mathematics and Science but the Teachers here have taken their time to teach us so I now understand.“

Another beneficiary said “I had a problem in Mathematics, Science and Social studies but I now understand those topics. I hope I will pass well.”

The General Project Supervisor of the NGO Mr. Daniel Owusu Koranteng, who doubles as the General Secretary of Maritime and Dockworkers Union who is an indigene of Akropong-Akuapem admonished the students to stay away from social media and Television programs rather and focus on their books to enable them to prepare well for the examination.

2020 poll to be won by party that tears down poverty, divisiveness