DOMINIC LAWSON: Please can our politicians stop calling this a war. It’s nothing like it


As so often in her 68-year reign, the Queen gets it right.

In her statement to the country (and the Commonwealth) last week on meeting the challenge of the coronavirus, the monarch did not once use the word ‘war’.

There was just the suggestive phrase ‘I am reminded that our nation’s history has been forged by people and communities coming together to work as one’.

In other words, the world’s only head of state who actually served in the last war — as a subaltern in the Auxiliary Territorial Service — studiously avoided making the parallel that every political leader has embraced.

No Cabinet minister can resist it, from Boris Johnson downwards. Thankfully, none of them has done so in a self-aggrandising way, unlike — inevitably — Donald Trump, who declared in a broadcast: ‘I view myself as a wartime President.’ 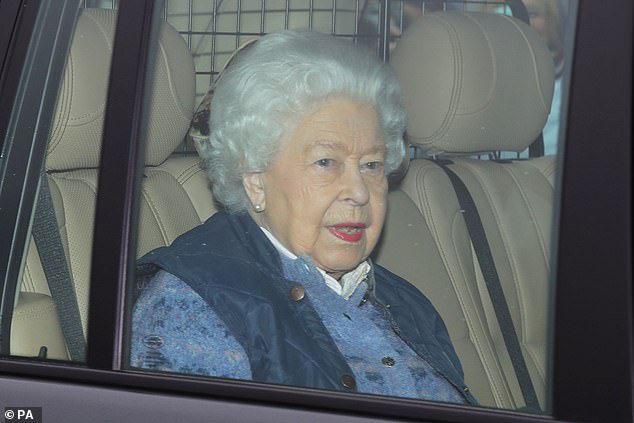 In her statement to the country (and the Commonwealth) last week on meeting the challenge of the coronavirus, the Queen did not once use the word ‘war’. Pictured: The monarch leaving Buckingham Palace on Thursday

It is understandable that politicians in this country should use the analogy with World War II. It was a time of colossal national endeavour, requiring a singleminded focus on just one purpose.

That the Nazi regime was one of the utmost depravity gave that real war — declared as an act of choice by the British government — a profound moral quality.

And the fact that the Allies won (by no means certain at the outset) means the analogy is an immensely positive one, designed to raise morale. But what would constitute victory now? No one can say.

In any case, the ‘war’ analogy has been rendered meaningless after overuse by governments and campaigners, long before the coronavirus struck. The war on drugs, the war on obesity, the war on poverty, the war on plastic, the war on saturated fats . . . the list is almost endless.

In the case of the coronavirus, the politicians are not just using it as a metaphor but as an exact comparison with the British people’s struggle in 1939- 1945. It really isn’t at all like that.

As the Italian writer Giorgio Agamben noted (and his country has been the worst affected by the coronavirus): ‘It is not surprising that people are speaking of a war against the virus.

The emergency measures oblige us to live in conditions of curfew. But a war with an invisible enemy that can lurk in every other person is absurd. The enemy is not outside, it is within us.’

This makes the campaign infinitely less uplifting, let alone socially unifying, than the national experience of 80 years ago. In a horrible way, we are all — within every country — threatened by our fellow citizens.

Last week, as I travelled home by train from London, the only other person in the carriage was coughing and spluttering. I glared in his direction and moved to the next carriage. Yet he probably had nothing more than a heavy cold.

And for all I knew, I might already have been infectious with the coronavirus, while not yet experiencing symptoms — thus more threatening to him than he was to me.

In terms of inappropriate behaviour, the scenes of supermarket shelves stripped bare by panic-buying have become a symbol of ‘me-first’ selfishness. But food stockpiling was also rife in 1939.

Besides, if families have been urged by government to enter a period of self-isolation, it is hardly surprising they would rush to stock up beforehand.

But this is where we are so much better off than in 1939-1945. Then, there was the possibility — at least before the tide of the war at sea changed — that the UK would be starved into submission by the German U-Boats.

Strict rationing meant that almost everyone experienced the sensation of hunger. 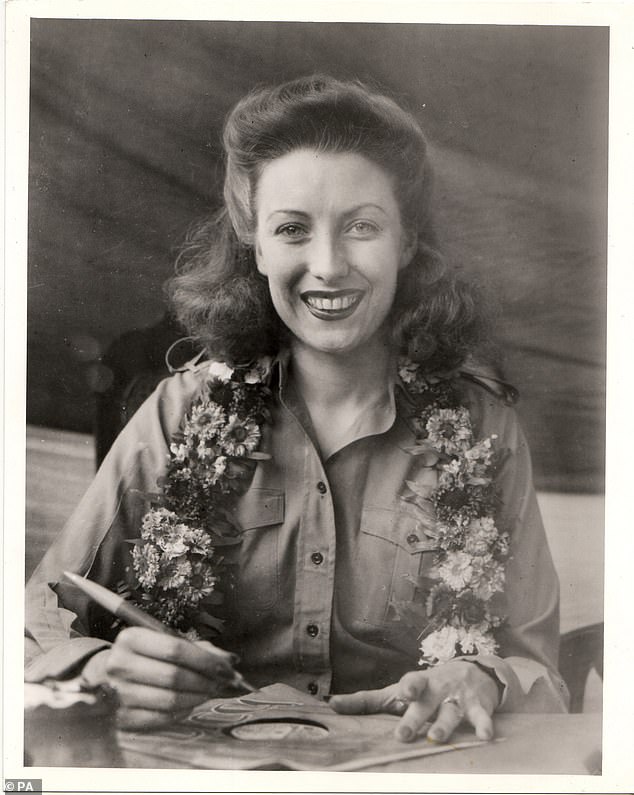 Former ‘Forces’ Sweetheart’ Dame Vera Lynn (pictured as a young woman), who turned 103 earlier this week, said: ‘During the War we got by with very little. . . we are very fortunate to have more food in our country than many others’

As Dame Vera Lynn — the former ‘Forces’ Sweetheart’ who turned 103 last week — points out: ‘During the War we got by with very little. . . we are very fortunate to have more food in our country than many others.’

Quite so; and I suspect that the panicbuying of long-lasting edibles such as dried pasta will soon cease when people realise there is no threat to food supply.

There is another musical Dame, a true heroine of the war years, whom I can’t resist mentioning, partly out of family pride but also to make the point that the moraleboosting she supplied to Londoners during the Blitz simply can’t happen now.

My father’s great-aunt, the pianist Dame Myra Hess, originated the wartime concerts in the National Gallery. 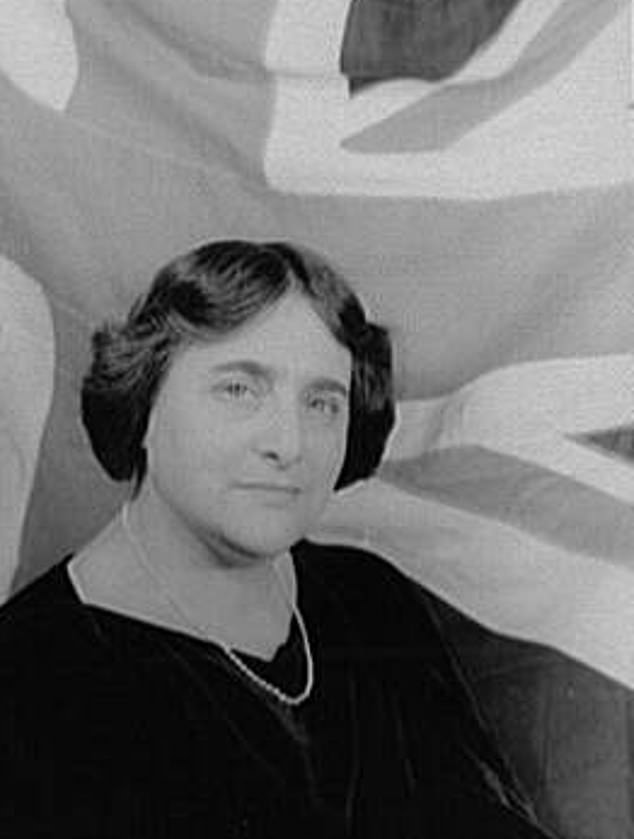 Myra Hess (pictured) approached the National Gallery’s director, Kenneth Clark, with the suggestion that she should organise daily concerts in the now-empty building

All the most valuable paintings there had been packed up and deposited in secret rural locations, to protect them from destruction by the Luftwaffe (Trafalgar Square, the home of the National Gallery, was a particular target of the Third Reich, not just because it was next to Whitehall; it would also have been a propaganda triumph to topple Nelson’s column).

Then, Myra Hess approached the National Gallery’s director, Kenneth Clark, with the suggestion that she should organise daily concerts in the now-empty building.

As Clark recalled their conversation: ‘The arts played a powerful role in the health of the nation at the best of times — and would play an even greater role now during wartime.’

The first concert was on October 10, 1939. Myra Hess, who gave it herself, had expected no more than about 50 people to attend.

But by the time the doors opened, the queue went all around Trafalgar Square and into a neighbouring street — a thousand people at least. 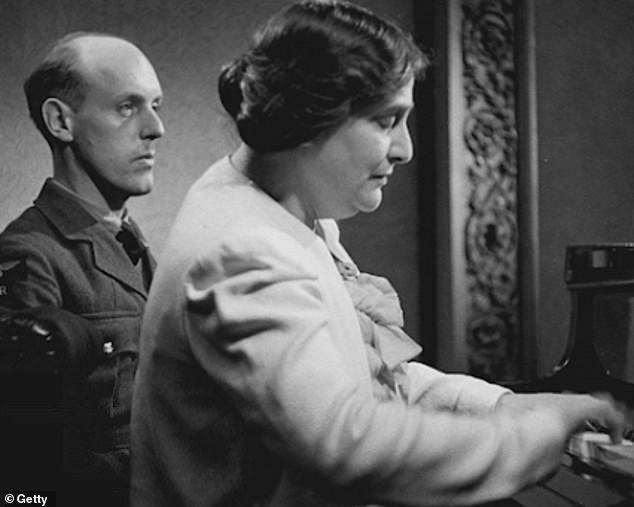 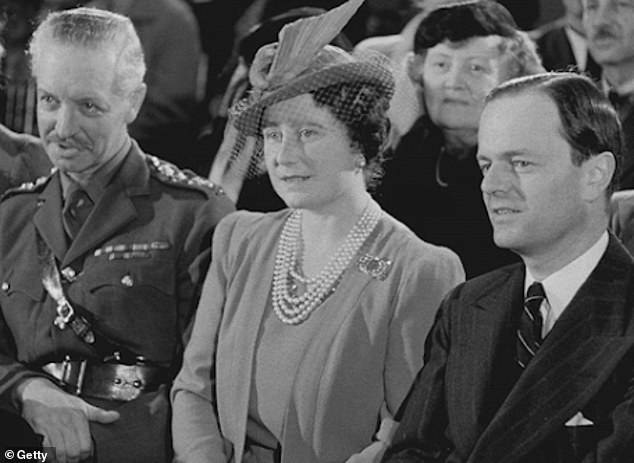 Our current Queen’s mother (pictured in the audience) was a regular attender of the concerts, recalling them as being among ‘the happiest hours’ she had known during the war

This was repeated every day (twice daily on Tuesdays and Thursdays). Not even the Blitz stopped the concerts: when the bombs began to fall, Myra Hess and the orchestras she hired played on in the Gallery’s basement.

The building was hit nine times, once during a performance of a Beethoven string quartet. Eye-witnesses claimed the players continued without missing a beat.

Our current Queen’s mother was a regular attender of the concerts, recalling them as being among ‘the happiest hours’ she had known during the war.

But there can be no equivalent moralebooster now, because the requirements of ‘social distancing’ have necessarily ruled out all such events. This makes the social solidarity called for by the Government still harder to achieve.

Moreover, as the historian Robert Tombs notes: ‘So much has changed since 1940. Society is more atomised, less homogeneous, less deferential, less trusting.’

On the other hand, human nature has not changed. Adversity brings out the best and the worst in us.

Although we will discover — and are already discovering — extraordinary acts of self-sacrifice and altruism, there is also the opposite. 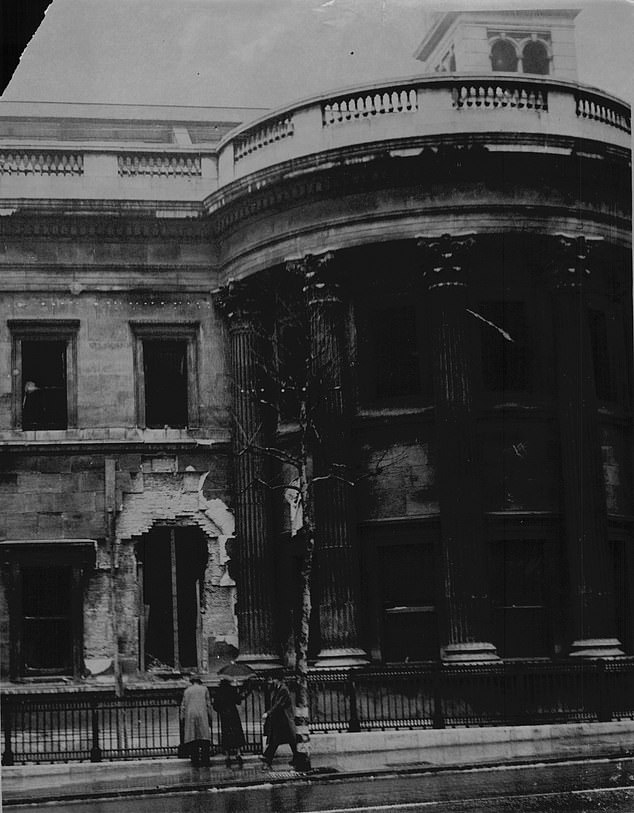 Last week it was reported that conmen are going from door to door posing as ‘virus testers’ to gain access to the homes of the isolated elderly.

But it is a myth that the British to a man and a woman behaved decently during the Blitz.

A recent BBC feature — Breaking The Law During World War II — set it out with painful clarity.

In Kensington, West London, a gardener was caught removing rings from four dead bodies in January 1941.

Ten of these involved auxiliary firemen.

And just as there will be cases of profiteering now, so there were then: the spiv Private Walker in Dad’s Army was based on that wartime phenomenon — though it wasn’t seen as funny in the least, at the time.

We will see various cases in which individuals corruptly seek to exploit the emergency grants set out by Chancellor Rishi Sunak.

But that too would be an echo of the past. There was abuse of government compensation schemes designed to support those whose homes had been destroyed by the Luftwaffe. 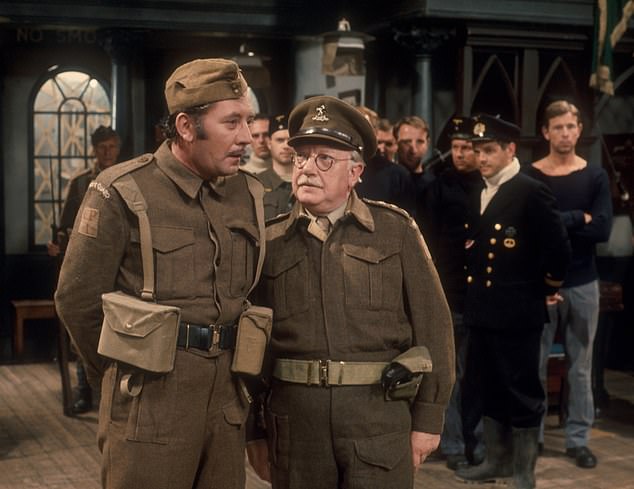 The spiv Private Walker (left) in Dad’s Army was based on that wartime phenomenon — though it wasn’t seen as funny in the least, at the time

One such person was jailed, having claimed to have lost his home 19 times during a three-month period. He scooped the equivalent of £500 on each occasion.

This is not to deny the ‘Blitz spirit’.

As one who lived through it, the novelist Julian Symons, wrote half a century later: ‘My feeling at the time was one of astonishment that the people I saw took death and destruction so calmly, their resignation blended with passive courage.’ The current crisis is nothing like that.

Our homes are not threatened with destruction.

The very existence of our country is not at stake, as it was then. This is not a war, or anything like it.

Our politicians scramble for hope as Australia, one of the most gregarious nations on earth, folds in on itself | Katharine Murphy | Australia news

Our politicians scramble for hope as Australia, one of the most gregarious nations on earth, folds in on itself | Katharine Murphy | Australia news

Washington struggles to catch up as coronavirus rages out of control

DOES GHANA NEED AN FX COMMITTEE-ghanatoday.net