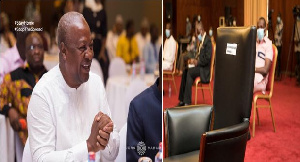 John Dramani Mahama failed to honour the president’s invitation, his seat was empty

President of the Republic, Nana Addo Dankwa Akufo-Addo, on Friday, April 3, 2020, met with the leadership of the various political parties in the country at the Jubilee House to deliberate on the best measures to contain the spread of the novel Coronavirus in Ghana.

According to President Akufo-Addo, they exchanged information and agreed on the measures that can be taken as political leaders to ensure the unity of our nation in the fight against the Coronavirus pandemic.

However, it has emerged that, former President of Ghana, John Dramani Mahama, was conspicuously missing at the program as photos circulating on social media show a seat which was labelled for the NDC flagbearer was later occupied by the party’s National Chairman, Mr. Samuel Ofosu-Ampofo.

The action of the ex-President to boycott the event has vastly been criticized by an Assistant Technical Officer at the Office of the President, Samuel Bryan Buabeng.

Reacting to the incident on his Facebook page, he slammed the NDC leader for failing to attend the meeting.

According to him, there is nothing more fulfilling than a political leader availing himself in times of difficulties to serve the nation he aspires to rule. He termed the former President as self-centred.

“The leader in a person is most evident during moments of difficulties and strife. For a political leader, nothing can be more fulfilling than being available to the service of the one true nation you hope to lead. The world is yet to find a match to former President Mahama’s selfish and self-centred tendencies”, he wrote on his Facebook page, sighted by Ghanaguardian.com.

Samuel Bryan Buabeng also noted with great disappointment that John Mahama has still refused to put Ghana first after he received backlash barely a month ago for boycotting this year’s Independence Anniversary parade held at Kumasi in the Ashanti Region.

“Even as we find ourselves in this uncertain times, he puts his selfish parochial interest ahead of the nation he desperately wants to come back to rule. I thought the backlash he received for boycotting Ghana’s 63rd Independence Anniversary will make him put Ghana first by attending today’s #COVID-19 political party leadership meeting, but no…it didn’t. Indeed, a leopard never changes its spots”, he jabbed.

Meanwhile, the leaders of the parties commended the President for the exemplary measures he has put in place to deal with the virus in the country.

A Woman To Love And Behold—My Apologia To Aba

A Woman To Love And Behold—My Apologia To Aba