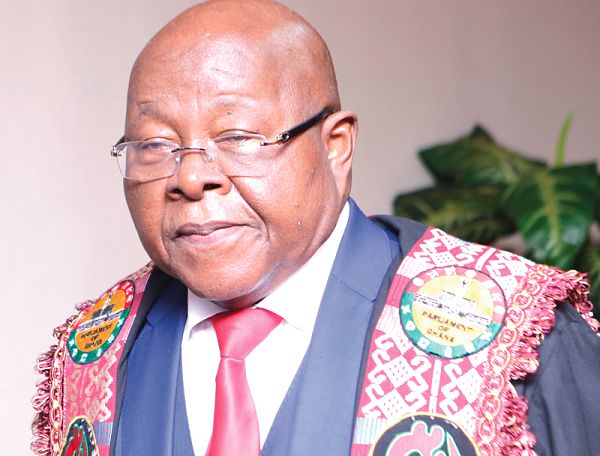 The Speaker of Parliament, Professor Aaron Mike Oquaye, has urged all Members of Parliament (MPs) to donate to the COVID-19 Trust Fund to support the efforts of the government in the fight against the pandemic.

He made the call after he had donated half of his salary for the next three months to the fund, set up by President Nana Addo Dankwa Akufo-Addo to support the vulnerable and needy who have been affected by the COVID-19 pandemic.

A memo from Parliament said the Speaker also announced that Parliament had, as a body, donated GH¢200,000 to the fund.

Parliament is the second arm of government to have donated to the fund, after President Akufo-Addo, representing the Executive, donated his salary for the next three months in a message to Ghanaians on March 20.

The Vice-President, Dr Mahamudu Bawumia, followed suit by donating his salary for the next three months, while all government appointees, made up of ministers and staff of the Presidency, also donated half of their salaries for three months.

All deputy ministers have also donated half of their salaries for two months.

In another development, seven organisations have also presented cheques for various sums of money to the fund.

Receiving the cheques from the individual organisations at the Jubilee House yesterday, the Chief of Staff, Mrs Akosua Frema Osei Opare, urged Ghanaians to consider the fight against the pandemic as one for all and not only the government.

She said the government valued and cherished all the efforts Ghanaians and organisations were putting into the fight against the pandemic.

“We are in this thing together. If we put our heads and hands together, we can overcome this pandemic,” she stressed.

She indicated that efforts had been scaled up in the contact-tracing exercise to find people who might have come into contact with those who had tested positive, while measures were also being put in place to halt the community spread.

She further gave an assurance that there would be accountability for all the support being received for the fight and said the establishment of the COVID-19 Trust Fund would ensure that.

The General Secretary of the CACI, Apostle Samuel Amponsah-Frimpong, commended President Akufo-Addo for “the bold, calm and mature manner in which he has steered the affairs of the nation in response to the COVID-19 outbreak”.