Readers say ‘cut the politics’ when it comes to virus


What’s with the grandstanding?

Our loved ones are failing ill. Our hospitals are at capacity. Our neighbors are dying. Our president and our governor are tweeting at one another to cast disparagement and blame. The timing couldn’t be worse for grandstanding, yet that seems to be about the only thing we can truly count on from our elected leadership.

It’s so frustrating on so many levels that it’s hard to pin down exactly what’s most madding. Is it the lack of seriousness? The search for scapegoats? The ineptitude? The egotism? All are top contenders. The most damning of all, however, is the abdication of responsibility by the select few whose inaction will hurt so many.

There have been, and there always will be, honest differences of opinion among U.S. leaders. The problem lies in those unforgivable instances when the thing people in a position of power hold most dear is the promotion of their cause at the expense of their charge. 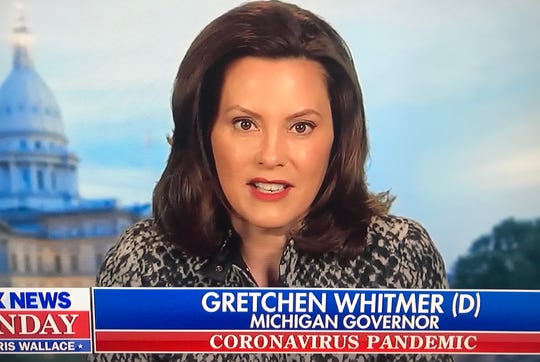 When two people — one running for reelection to the presidency, and the other running for appointment to the vice presidency — prioritize station over looking out for their fellow Americans, we are ill-served.

Right now, we need to be completely and overwhelmingly focused on solving the issue at hand — protecting the health and well-being of our families and our fellow citizens.

This is exactly what leaders like Gov. Mike DeWine of Ohio and Gov. Andrew Cuomo of New York have been doing.

While I certainly don’t agree with Cuomo on most policy positions, I applaud both him and DeWine for their steady, thorough, and proactive efforts as well as the verve and passion they have brought to the fight on behalf of their states.  And here at home, Gerry Anderson, the executive chairman of DTE Energy, has done a laudable job in leading the effort to share, develop and coordinate responses to the COVID-19 outbreak among Michigan’s largest businesses.

But Michigan and the U.S. have come to an important crossroads. Will we continue to choose our political leaders from a political class whose only qualification for their position is that they were previously employed as a lesser elected official? Or will we, in the elections to come, assemble en masse and demand men and women for these offices who are the best of us?

I’m tired of attacks on Trump

I’m a 50-something wife and mother living in Michigan, and after only three weeks into

between homework. I’m not tired of watching my husband do things around the house

he’s been promising to do for years. I’m certainly not tired of smelling homemade

bread coming from the bread maker I thought we retired over 20 years ago.

Here’s what I am tired of.

I’m tired of watching our president, who is fighting so hard to keep Americans safe from

an invisible enemy, being bullied by a hostile media during his daily coronavirus press

and his highly-qualified coronavirus task force team, the media focus on “gotcha”

moments. They edit comments made by Trump to make him appear incompetent and uncaring. As Trump’s approval ratings continue to climb, networks, whose ratings are soaring during Trump’s press briefings, are considering not airing them at all.

shutting down our borders to China, and in the next breath, criticizing him for not doing

enough to control the spread of coronavirus in America.

One of his main sources of criticism is Michigan Gov. Gretchen Whitmer. Recently, while anxious Michigan residents were losing their jobs, watching their bank accounts dry up, and their retirement savings disappear, our governor decided to pick a fight with Trump during an interview on MSNBC.

When asked about her criticism of Trump, Whitmer claimed she wasn’t looking for a fight, she was simply looking for help. She sure has a strange way of asking.

We’re tired of the attacks on our president, and frankly, we don’t give a darn what the

media say anymore. We know the truth: Trump may be direct, he may be harsh, and

he may even pull out the brass knuckles on occasion. But we’re OK with that.

In 2016, Trump campaigned on finding jobs for the forgotten man and woman.

Trump has given Americans real hope in the way of jobs, especially here in the state of

Michigan. And then, despite his best efforts to shut down travel between the U.S. and

China, the coronavirus made its way to America, causing our incredible economy to

come to a screeching halt.

Pence with good health, wisdom and the strength they need to keep Americans safe,

despite the unimaginable obstacles that have been placed in his way.

Will the Covid-19 crisis speed up or slow down Modi’s centralising tendencies?

Will the Covid-19 crisis speed up or slow down Modi’s centralising tendencies?