By Michael Thomsen For Dailymail.com

Listings for the game were removed from two large online retailers, Pinduoduo and the Alibaba subsidiary Taobao, along with all Animal Crossing related accessories.

No official reason for the removal was given, but activist Joshua Wong of the Hong Kong youth movement Demosistō said the decision was caused by protest activities he and others had conducted in the game. 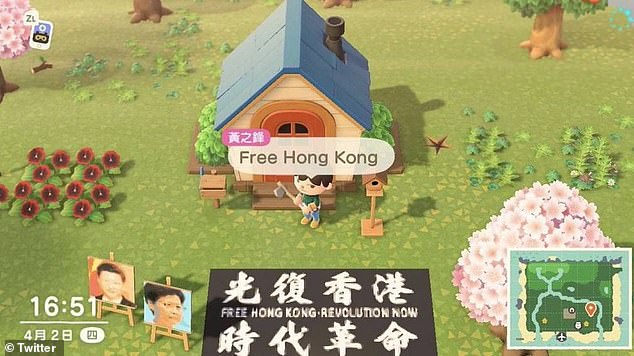 Chinese retailers have removed listings for Animal Crossing: New Horizons after a number of groups used the popular Nintendo game to stage online protests against the government

‘Oh no, Xi Jinping banned #AnimaCrossing in China (apparently because I play it), and these angry gamers are blame me everywhere instead of blaming their own government,’ Wong wrote on Twitter after the ban was announced.

According to a report from PingWest, public chat groups dedicated to the game on WeChat had also adopted new rules to prevent discussion of the ban and were removing any members who tried to bring it up.

The game is set on a small cartoon island and asks players to help a quirky cast of anthropomorphic animal residents with errands and chores while gradually raising money and collecting items to build out their own home.

The game allows players to upload their own custom images through a QR code reader, and Wong took advantage of this feature to stage small in-game protests against China’s activity in Hong Kong.

‘After the outbreak of coronavirus, it was difficult to organise physical gatherings,’ Wong wrote in a Twitter post shortly after Animal Crossing’s release.

‘With a new game out, we can have virtual protests and we just have to use our creativity to make a new kind of protest tool.’ 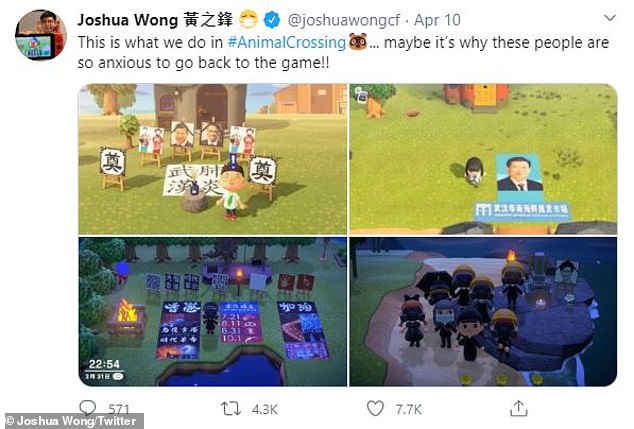 Joshua Wong of the Hong Kong based youth activist group Demosistō used the game for a range of anti-government protest events, which he promoted on Twitter 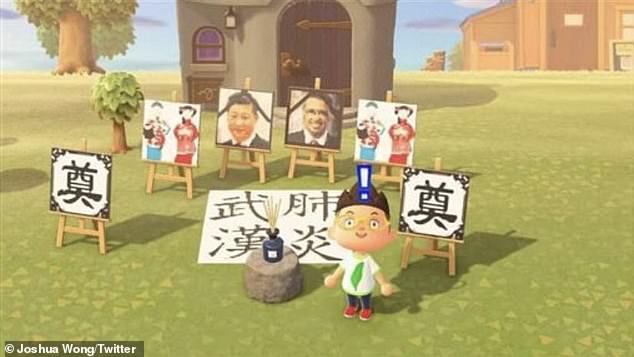 Wong organized a mock funeral for Chinese president Xi Jinping and World Health Organization director general Tedros Adhanom with a sign declaring the cause of death: was ‘Wuhan pneumonia’ 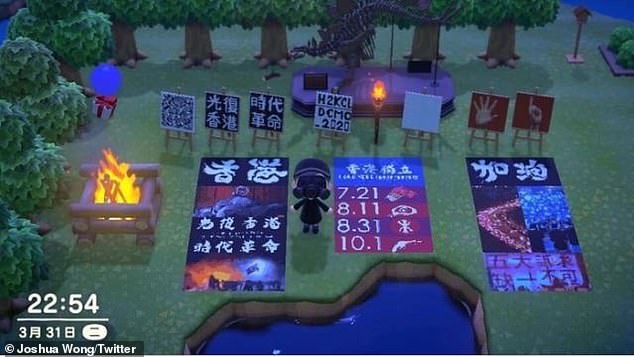 The Chinese government has long had strict policies limiting the presence of video games in the country, enforcing a full ban on all consoles until 2015. The Nintendo Switch, the console needed to play Animal Crossing, wasn’t officially approved for sale until December 2019

One protest saw scanned photos of Carrie Lam, Hong Kong’s Chief Executive, laid out in a row on a beach while players lined up and hit the photo with fishing nets and kicked sand over it.

In the foreground, players had created a black and white banner that said ‘Free Hong Kong Revolution Now.’

Another protest features an in-game funeral with scanned photos of Chinese president Xi Jinping and World Health Organization director general Tedros Adhanom with a sign declaring the cause of death: ‘Wuhan pneumonia.’

The Chinese government has maintained strict regulation on the games industry for decades and has only recently begun to allow games to be legally sold in the country.

Game consoles were officially banned until 2015, and the Nintendo’s Switch wasn’t approved for sale until December, when the two and a half year-old console launched in partnership with Chinese tech giant Tencent.

Before protesters began using the game, a number of official Chinese government agencies used the game to promote health and safety information to residents during the COVID-19 shutdown.

According to games industry analyst Daniel Ahmad, the Shanghai Public Security Bureau organized public safety demonstrations in the game to reinforce the importance of social distancing and the use of face masks in public.

The Shanghai Fire Department also used the game to create public service announcements about how to safely manage a fire.

Ahmad believes players will likely still find ways to get their hands on the game despite the ban.

A number of online retailers have created listings for the game using different code names to keep it hidden from government monitors.

When heading a GLC is a political reward

NDC Executive dies in a motorbike crash while campaigning