The hate for the father spreads to the daughter 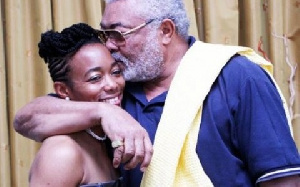 Hate, lies, and hypocrisy, are the three elements associated with politics because politicians think without them activities will not function very well but the truth is these elements are impediments for a country to cultivate a successful government.

Without objective criteria, hate can lead to the attack of hard-working people, including politicians. Politics in Ghana, like other African countries, are accustomed to double standards of untruth, deception and the lack of tact, diplomacy, and a sense of humor.

An article captioned ‘Probe Politicisation Of Food Distribution’ appeared on the ModernGhana news site on April 16, 2020.

The article was about the dissatisfaction of the Member of Parliament for the Klottey Korle Constituency, Dr. Zanetor Agyeman-Rawlings, calling on the government to probe the seeming politicization of food distribution amidst the Coronavirus pandemic.

The call of the Member of Parliament for the Klottey Constituency, Zanetor Agyeman Rawlings is based on the fact that since the food distribution began, reports are circulating that it is done on a partisan basis. Prior to this accusation, there are some few videos on Youtube on this particular issue as well.

However, according to the publication, the Minister for Gender and Social Protection, Mrs. Cynthia Mamle Morrison, who wasn’t happy over what the Member of Parliament said, hit back, calling her remarks fabricated lies.

This is one of the typical antagonisms in Ghanaian politics, even if it’s true and if you dare to speak about it the ignorant Ghanaian will either insult or accuse you of being a member of the NDC.

What is the significance of joining a political party in Ghana when in the country that I live for the past twenty years I have no affiliation with any political party despite how efficient the politicians are than African politicians?

Which government comes to power in an advanced country and leaves projects to rot because they were started by the opposition? Unless Africa or Ghana. Akufo Addo, who wants Ghanaians to believe he is efficient and an intelligent leader did that.

I can’t recollect how many articles I wrote pertaining to this issue, including one to the Minister of Information, Mr. Kojo Oppong Nkrumah, humbly requesting him to persuade Akufo Addo to take over the uncompleted projects, including hospitals, left unfinished by the former government.

Akufo Addo refused, however, if he had put jealousy and hate behind him and completed those projects, the hospitals would have served a good purpose during the outbreak of the coronavirus in the country at the moment.

Many NPP supporters are only interested in hate, verbal attacks, and insults without realizing that every bad policy or decision taken by Akufo Addo doesn’t affect him or his ministers but the common Ghanaians.

John Jerry Rawlings is not only the longest ruler in the political history of Ghana but also one of the most hated Ghanaian leaders after John Mahama, the fact the psychological scars during his military era are still taking its toll on Ghanaians today.

The atrocities committed by the military junta during the days of Rawlings are some of the reasons the hate for him has overflowed its banks to her innocent daughter, Zanetor. Even though that’s what most Ghanaians enjoy, it is not right. Ghanaians should not hate Zanetor because of her father.

All the ministers enjoy various benefits, including the free supply of petrol for their vehicles, apart from their fat salaries, while the common Ghanaians wallow in poverty amidst poor medical care and a high rate of unemployment.

The fact is, the intelligent Ghanaians don’t care about politics in the country, it’s those that everything that glitters to them is gold, worship Ghanaian politicians because they are expecting miracles from them which will never appear anywhere in Ghana because of massive undetected and invincible corruption.

Hate in politics is a disease that destroys the entire nation, therefore, if Ghanaians will resort to this kind of life in the country, I must assure them that everything will seem fine to them in the country, yet things will be extremely bad. Time will tell.

Stop the attacks, Adom-Otchere is one of Ghana's best journalists -Presidential staffer

Ballot papers will be compromised by printing company