TUC will keep govt in check on IMF loan utilisation-Ghanatoday.net 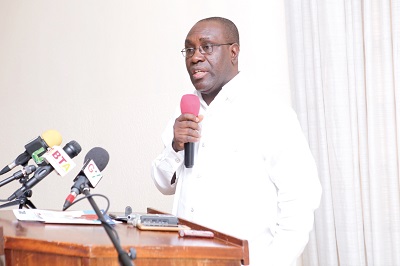 The Trades Unions Congress (TUC) has commended the International Monetary Fund (IMF) for granting the country an interest-free loan that was not accompanied by “the usual IMF Conditionalities,” something that organised labour had long criticised.

The Secretary-General of the TUC, Dr Anthony Yaw Baah, told the Daily Graphic yesterday that the $1 billion loan was timeous and would prove critical to the government’s fight against the coronavirus disease (COVID-19).

He gave an assurance that the TUC and other civil society organisations would check the government to make sure that the loan was used judiciously and for the right purposes.

Dr Baah said the TUC would ensure that money that was spent to help cushion the people, support businesses and stimulate the economy against the impact of COVID-19 was worth the expenditure.

As of yesterday, the virus had infected 641 people in 10 regions of the country with eight deaths in all.

Under the terms of its Rapid Credit Facility (RCF), the IMF on April 13 this year, approved the government’s request for financial assistance to help it contain the impact of COVID-19 on the lives of the people and the economy.

The entire amount is due to hit the account of the Bank of Ghana by the close of work today.

“We at labour usually do not see the IMF as our friends because we have always insisted that their policies are not in agreement with the country’s developmental aspirations.

“But this time round, I think we are happy with what the IMF has done and we will want to also commend them for approving the loan so swiftly,” Dr Baah said.

In a tone that was a complete departure from TUC’s stance on Ghana’s relation with the Bretton Woods institutions, Dr Baah also said organised labour supported the government’s decision to seek financial assistance from the IMF to help contain the spread and impact of the disease.

The TUC Secretary- General said unlike previous loans that came with ‘strings attached,’ the Finance Minister, Mr Ken Ofori-Atta, had convinced TUC that the $1 billion loan would not be given under a programme and would, therefore, not be accompanied by conditionalities, reviews and the straightjacket rules that the fund was noted for, which was exactly what had happened.

He said the swiftness with which the IMF approved the country’s request was proof of the confidence it had in the way the economy was being managed.

Dr Baah said it was expected that the government would abide by its fund disbursement plan in the manner that had convinced the IMF to grant the loan request.

The TUC has over the years resisted the country’s requests for financial assistance from the IMF and the World Bank Group in view of conditionalities that usually accompany the requests, describing them as not reflecting the realities on the ground.

Its ambivalent relationship with the Bretton Woods institutions got to a peak in the 1980s when the country’s Structural Adjustment Programme (SAP), which was implemented under the watch of the two world bodies, threw a number of people out of jobs, following the privatisation of some state-owned companies and institutions.

The TUC maintained that the policy advice given by the two institutions put workers under intolerable levels of hardships and changed the structure of the economy in ways that were unsustainable.

But unlike previous IMF loans, the current $1 billion, which happens to be the biggest financial assistance the country had received from the fund came without any conditionality attached and attracts no interest. What was more, the IMF will not monitor how the funds will be disbursed or utilised.

In an earlier interview, the Country Representative of the IMF, Dr Albert Touna-Mama, had said holding back conditionalities was because the loan came under the fund’s Rapid Credit Facility, which is a concessionary lending window that assisted low-income countries faced with disasters, shocks or emergencies, to recover.

I’m the ‘God’ of Akwatia