The new capitalism: In the foreseeable future, politics will drive economic policies, not market-based rationality Western investors will also have to factor in political risks in their investment decision-making, writes Ashutosh Varshney

In 1920, John Maynard Keynes, perhaps the most influential economist of the first half of the 20th century, wrote a famous passage, which could well have been written for our times. Worth citing at length, Keynes was speaking of how the First World War ended what we now call Globalisation 1.0 that lasted nearly a century till then.

“What an extraordinary episode in the economic progress of mankind, which came to an end in August 1914?… The inhabitant of London could order by telephone, sipping his morning tea in bed, the various products of the whole earth, in such quantity as he might see fit, and reasonably expect their early delivery upon his doorstep; he could at the same moment and by the same means adventure his wealth in the natural resources and new enterprises of any quarter of the world, and share, without exertion or even trouble, in their prospective fruits and advantages; …He could secure forthwith, if he wished it, cheap and comfortable means of transit to any country or climate… But, most important of all, he regarded this state of affairs as normal, certain, and permanent, except in the direction of further improvement, and any deviation from it as aberrant, scandalous, and avoidable.”

No World War is likely anymore, as scholars of international relations continually remind us, thanks to nuclear weapons. But can COVID-19, instead, bring an end to what scholars call Globalisation 2.0, which began in the early 1980s and has lasted for four decades, an era when human beings, of a certain class, “could order by (the internet)… products of the whole earth… adventure wealth in any quarter of the world”, and regard “this state of affairs as normal, certain and permanent”?

In strictly economic terms, globalisation is about the free movement of capital, goods and labour across national borders. As I wrote in these pages some time ago (‘Globalisation in retreat’, IE, November 30, 2017), labour flows were never as free as the movements of capital and goods. Capital and goods are disembodied; one does not necessarily see who produced them. Migrants are embodied, as it were. One can directly observe how ethnically, racially, religiously different from the mainstream they might be. Hence labour flows, if large, have nearly always triggered right-wing politics of nativism in a way that the movements of goods and capital rarely have.

Donald Trump’s unrelenting critique of globalisation predates COVID-19. He made non-white immigrants, especially Hispanics and Muslims, a special object of his political ire, but he was also vigorously against free trade as well as critical of businessmen who, in search of lower costs, had made China the destination of their accumulated investments, transferring jobs away from America’s industrial heartland. He levied higher tariffs to curtail freer trade, and exhorted American corporations to bring capital back to the US. In Europe, a similar politics has been led by the UK, though less vociferously.

What will the pandemic do to this political thrust that had already become a reality in several major economies? In any realistic political sense, this question cannot be answered unless we pay special attention to how Globalisation 2.0 has benefitted China.

One might, of course, first wish to note that China was among the biggest sufferers of Globalisation 1.0 (1815-1914). In 1800, an estimated 33 per cent of the world’s manufactures were produced in China. Defeats in two Opium Wars later, this share had gone down to 6 per cent by 1900. More significantly for now, China was far behind other economies in the early years of Globalisation 2.0. In 1980, it was the 48th largest economy in the world. In 1982, with GDPs at roughly $200 billion, Indian and Chinese economies were similar in size.

Given the current pandemic, even more revealing are the data on medical equipment. For 50-80 per cent of its supplies, the US was dependent on China for protective surgical garments, plastic face shields, textile face masks and thermometers. Only for ventilators and hand sanitisers was the dependence less than 20 per cent.

No matter how much businessmen and economists argue that these trends are purely economic, only demonstrating how easy it is to manufacture at scale in China, the political leaders of the world, not simply in the West, can only view it with great concern and, if China threatens supply disruptions for critical materials, even as a national security issue.

The political winds are now independent of President Trump, who is clearly trying to scapegoat China to cover up his own bungling. Given all the doubts, right or wrong, about how China handled the information about the origins of the virus in Wuhan, the anger against China in world capitals is very palpable. Born of sudden and enormous suffering, such anger cannot but have an impact on the economics of globalisation.

We should not only expect that labour flows will now be more strictly regulated than before. But also more than ever before in recent decades, Western investors will also have to factor in political risks in their investment decision-making. Instead of chasing lower labour costs, they will either bring capital back to domestic shores, or geographically restructure their supply chains. For a whole range of goods, the global supply chains for all practical purposes became Chinese supply chains. That level of economic concentration is no longer politically sustainable.

For the foreseeable future, economic efficiency, the cornerstone of market-based systems, will have to go into a lower gear. Politics will drive new economic policies, not market-based rationality. Globalisation will not end, but it will be pushed into greater retreat. We are entering a new phase of capitalism. 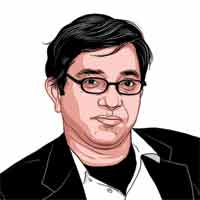 How will Modi’s pandemic politics change as India enters Lockdown 3.0?

How will Modi’s pandemic politics change as India enters Lockdown 3.0?

energy lobbyists in the US