This was the year Arizona was poised to become the new Nevada — a nearby state for California Democrats looking for a place to flip from red to blue.

Caravans from California — in particular from the Bay Area — had already started. Arizona Democrats were looking forward to the extra canvassers to help capture a battleground state that President Trump narrowly won in 2016, where first-term GOP Sen. Martha McSally looks vulnerable and where Republicans have a narrow hold on the state legislature.

But the coronavirus pandemic dashed those plans, sidelining an army of supporters who could provide Arizona Democrats with one of the most powerful ways to convince voters to support them: face-to-face campaigning.

Swing Left, an organization dedicated to flipping GOP areas to Democratic ones, led six trips from California to Arizona starting last fall. The pandemic forced the cancellation of eight more planned for the spring. Organizers said momentum was building just before everyone had to shelter in place, as more than 200 people from across California made two weekend trips to the desert in February.

“And this was in February,” said Debbie Raucher, a volunteer organizer for Swing Left in Oakland, overseeing a chapter with 2,700 members. “Usually, you don’t see those kinds of numbers of people coming out until October.” 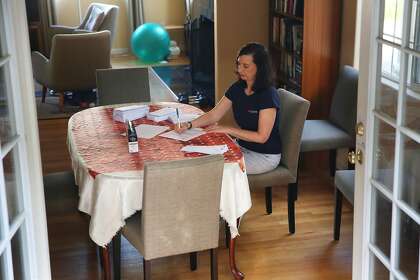 The appeal of Arizona is that it is a “super state,” as Swing Left organizers call it. It is a place where volunteers can influence a presidential campaign, a U.S. Senate seat and a state legislature. That is one reason why Trump chose Arizona last week to make his first trip away from the East Coast since the pandemic hit.

Presumptive Democratic nominee Joe Biden leads Trump in the state by 49% to 44%, according to the RealClearPolitics.com aggregation of top polls. McSally trails Democrat Mark Kelly by nine points.

Nevada, with two Democratic senators and a track record of backing Barack Obama and Hillary Clinton in the past three presidential elections, is less in need of outside help from California Democrats looking for a place to expend their political energy. It’s typically Democrats who go looking for a state that, unlike California, is competitive between the two parties — such trips by Republicans are rare.

“You get triple your bang for your buck when you do work in Arizona,” said Raucher, a foster care advocate who volunteers roughly 20 hours a week for Swing Left. “But just because there are no road trips doesn’t mean there isn’t work to do.”

Arizona is no longer a reliable reflection of its iconic conservative Sen. Barry Goldwater, whose small-government principles influenced the Reagan revolution of the 1980s. Its politics have inched left over the past decade, influenced by a growing Latino electorate — now roughly 21% of the vote — and by people who have moved from California in search of cheaper housing. More than 500,000 Californians relocated to Arizona from 2010 to 2018, according to census statistics.

California Democrats dabbling in Arizona politics should keep in mind that the state’s sensibilities are far different from their own, progressive activists say. Nonpartisans there are more truly middle-of-the-roaders than in California, where they are more likely be disaffected former Republicans or Democrats.

“Here there are a lot of people who really are in the middle,” said Nelson Morgan, a retired UC Berkeley professor and former Point Richmond resident who moved to Arizona last year and is active there in Democratic politics. “You have people here who like their guns and are very interested in the environment.

“Here, one of my best friends is a Republican,” Morgan said. “I don’t know if I knew more than one Republican when I was at Berkeley.”

Colleen McCarthy, Swing Left’s California coordinator, said, “It is not about bringing our California way there. They are much more independent. Some of the issues they want to talk about don’t fit in a Democrat versus Republican box.”

Persuading independent Arizona voters to register as Democrats isn’t easy. Jim Johnson, an Arizona retiree who hosted visiting California canvassers in his Sun City West home in February, said their group knocked on 100 doors. Of the 20 people who answered, only two re-registered as Democrats.

“When you talk about independents here, they’re very conservative financially but liberal on some social issues,” Johnson said.

A March survey by Univision and Arizona State University found that 36% of the state’s Latino registered voters felt that Democrats “didn’t care much” about them and 12% felt they were “hostile.”

“The fact that a third of Latinos thought that Democrats don’t care too much should be alarming,” said Edward Vargas, a professor of transborder studies at Arizona State University and author of the poll. “People feel that they aren’t being contacted by the campaign or brought into it.”

He added, “Does Trump have a chance (in Arizona) to win? Yeah, I think he has a chance. Democrats can’t expect Latinos to just vote the party line.”

Organizers with Living United for Change in Arizona, a 10-year-old organization advocating for Latinos, were looking forward to having up to 3,000 volunteers from California in August to help them make the case for the state’s Democrats.

“Those connections were in the works and we were ready for them,” said Tomas Robles, co-executive director of the organization. “Unfortunately, COVID-19 happened and those conversations are suspended for now.”

Instead, the organization is focusing its efforts online. 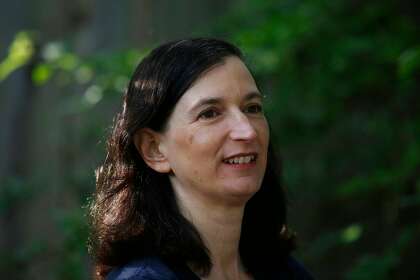 Other left-leaning groups have pivoted to alternative means of contacting voters. Swing Left is among several groups joining forces for what they call “the Big Send.” Activists are writing letters to battleground voters and banking them to send in the final months of the campaign.

“We call it ‘Canvassing from Your Couch,’” said Craig Koester, an organizer with the San Francisco chapter of Sister District, which aims to flip state legislatures that will draw new political district boundaries for the 2020s.

“For Californians hoping to help in Arizona, it’s going to be about texting and calling,” said Ben Wessel, executive director of NextGen America, which plans to spend $45 million in battlegrounds this fall to try to persuade young people to vote progressive.

Wessel hopes to take his outreach a step further if physical distancing rules are relaxed by November. He plans to attend a cousin’s wedding in Palm Springs on the Saturday before election day.

“Then,” Wessel said, “the whole family is going to hop in a car and drive to Yuma to help with get-out-the-vote.”