It cost consumers more to purchase goods and services in the month of April this year than it did in the months before, data released by the Ghana Statistical Service (GSS) has shown.

The Government Statistician, Prof. Samuel Kobina Annim, said at a news conference yesterday, May 13 that inflation for April rose to 10.6 per cent from the 7.8 per cent recorded in March.

Addressing the media to release the April inflation, Prof. Annim said the figure was driven largely by increased prices in gari, fresh cassava, yam and plantain, among other items in the food and non-alcoholic beverages basket.

He said while prices of gari and fresh cassava rose by 45.2 per cent and 29.7 per cent in April, those of yam and plantain were up by 13 per cent and 6.9 per cent, making them the top four items with the highest price changes in the month under review.

The Government Statistician later told the Daily Graphic in an interview later that the data collected by the service showed that the rise in inflation for April was due to the restrictions placed on movements in the Greater Accra Region and parts of the Ashanti and Central Regions.

He said the restrictions caused prices of goods and services, especially those under the food basket to skyrocket, resulting in inflation peaking at 10.6 per cent in April almost a year. 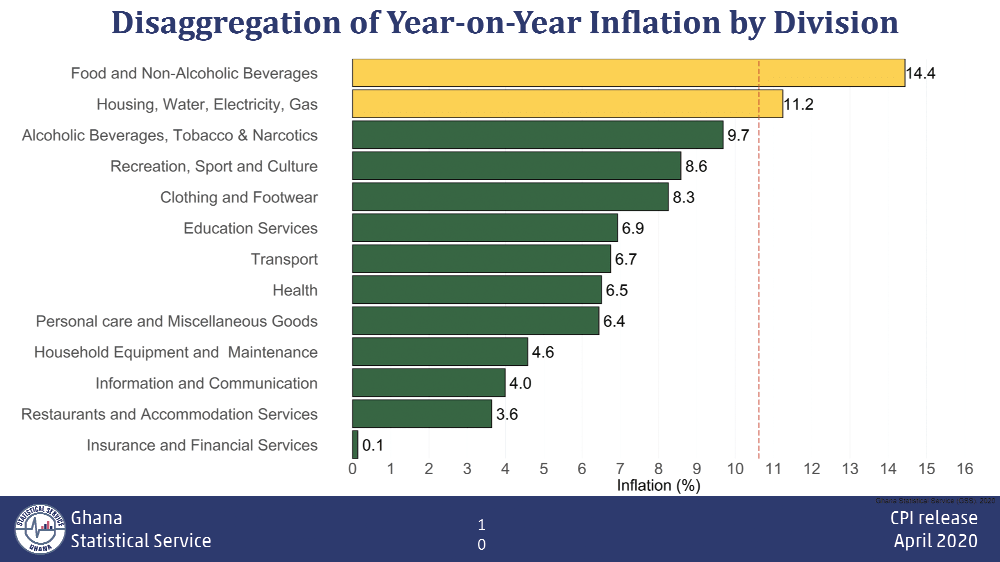 He said the regions where the restrictions on movements were imposed also registered substantial increases in their regional inflation rates, with the Greater Accra Region registering the highest regional inflation rate of 15.5 per cent compared to the Upper East Region, which recorded the lowest figure of 2.3 per cent.

The statement also showed that the month-on-month inflation rose to 3.2 per cent in April this year from the 0.8 per cent recorded in March 2020.

Prof. Animm said although the spike in inflation for April was due to the COVID-19, the GSS did not expect the trend to continue into the coming months, following the easing of the restrictions initially placed on movements.

He said while the service had not conducted any research into the possible behaviour of prices in the coming months, it was convinced that inflation would steady due to the lifting of restrictions imposed to contain the spread of the  virus.

“With the ease in restrictions, we expect a reverse in the movement of inflation but not to the March levels of 7.8 per cent,” he said, referring to the March 2020 inflation, which was the third time in a row that the figure had remained unchanged.

Airbus Scandal: Mahama, others will be jailed before December 7 polls

Surge in Coronavirus cases show that Akufo-Addo has failed

Vote Akufo-Addo for taking leadership to an outstanding level