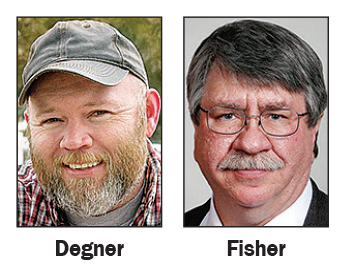 The COVID-19 pandemic hit just as 2020’s political climate is heating up.

Campaigns are running differently than before because of the need for social distancing as former Vice-President Joe Biden has been forced to campaign from his home instead of meeting people face to face. Elections on the ballot are being impacted as well, including the race for Iowa’s State House seats.

In District 72, which contains most of Marshall County, all of Tama County and a sliver of Black Hawk County, Rep. Dean Fisher, (R-Montour), is waiting for the legislature to reconvene on June 3.

“We can’t really door knock or any of the other typical campaign events,” Fisher said. “We’re really just sitting tight and waiting for the session to finish and then we’ll see how things go from there.”

The last time there was a pandemic in an election year was 1918, but there hasn’t been a presidential election during a pandemic for more than a century if ever.

“We’re figuring this out as we go,” Fisher said. “I’m hoping that by the summer things will be back to normal.”

FIsher sees putting signs out as being especially important during this election year.

“Just to let people know that you’re running,” he said.

Dave Degner is a Democrat running for Iowa Senate District 36 and his plans to shake hands and meet people face-to-face have been put on the back burner. The district he’s running for covers all of Marshall and Tama counties and part of Black Hawk County.

As a non-incumbent Degner faces more of an uphill battle than Fisher in his district.

“I don’t have a primary so that takes a little stress off my end,” Degner said. “It is tough. Obviously just trying to get your name out there and getting your message out and getting publicity is the name of the game.”

Degner and Fisher have had to adapt to the changing atmosphere and times because of the pandemic.

“I’ve been focusing on letter writing and phone calls when I have free time,” Degner said. “We don’t really have a whole lot of other options.”

He hopes that by late summer the pandemic is over.

“No matter how much name recognition I have it’s never going to be enough, you’re always going to want to meet more people,” Degner said. “That’s how you win an election.”

Today’s breaking news and more in your inbox

Vote Akufo-Addo for taking leadership to an outstanding level