Early release from Arizona prisons a matter of public health, not politics

Opinion: We projected that we can reduce the death toll by nearly half if we stop incarcerating people for low-level offenses and release those who are vulnerable due to age or health conditions. 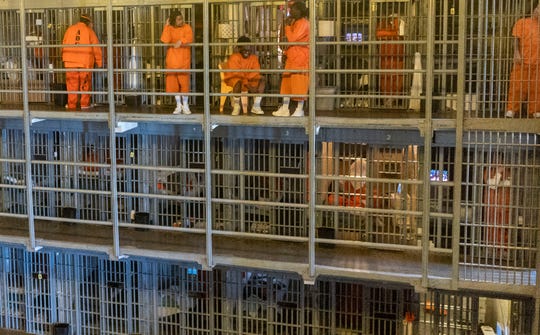 The nationwide call to decarcerate jails and prisons to combat COVID-19 is not a matter of politics, as Maricopa County Attorney Allister Adel argued in a recent opinion editorial, but of fact.

There is no getting around the truth: Reducing the incarcerated population will reduce the infection and death rate for all of us. Statistics do not have a political agenda.

I was part of a team of statisticians and academic researchers that created the first published epidemiological model showing the impact of COVID-19 on jails and by effect, the general population.

The virus can and already has spread rapidly in jails and prisons because people are unable to practice social distancing and hand-washing. What our model shows is that more infections in jail means more infections in the broader community, which is connected through correctional staff who come in and out every day and people who are arrested and released.

We projected that we can reduce the national death toll by nearly half if we stop arresting and incarcerating people for low-level offenses and release those who are vulnerable due to age or health conditions.

The impact could be even greater in Maricopa County, where the COVID-19 countywide death toll could be 69% higher than current projections if jail populations are not immediately reduced.

The higher death toll is due in part to the county’s high incarceration rates, and large corrections staff presence. It doesn’t account for other issues plaguing the county, including racial profiling and documented poor conditions inside jails.

Other states have acted without rise in crime

This projection is an estimate — we can’t predict the exact impact of inaction, but what’s certain is that ignoring the risks incarcerated people face will make flattening the curve more difficult for all of us.

States and counties across the nation have already acted in response to this concrete truth, including Colorado, Connecticut, Louisiana, New York, North Carolina, and Ohio. Adel, ironically, uses public safety as her reason for not following the lead of these other states.

However, the facts prove that public safety and public health do not need to be at odds. Throughout history, data show that large scale releases for certain legal, political, and health reasons, have not led to increases in crime.

Arizona has a high incarcerate rate to begin with

Arizona needed reforms in the first place. It has the fifth-highest incarceration rate in the nation and people of color are overrepresented in jails and prisons. Maricopa County is no exception. In taking the recommended actions, officials would be enforcing reforms that should have happened a long time ago.

The model we created is the result of research by statisticians, mathematicians, and academic researchers — not politicians. We are already seeing the projected outcome play out in jails across the country.

Officials can either evaluate the evidence and respond accordingly, or ignore them and deal with the consequences. There is strong bipartisan and widespread support for decarceration as a response to COVID-19.

Officials also have the choice whether to listen to constituents, and that includes Adel, who is running for election this year.

Aaron Horowitz is chief data scientist at the ACLU, where he serves as the technical lead for a team of analysts, engineers and data scientists who help ensure ACLU activities and policies are evidence-based. On Twitter, @aaron_horowitz.

Deploying true entrepreneurship in the fight against COVID-19 [ARTICLE]-Ghanatoday.net