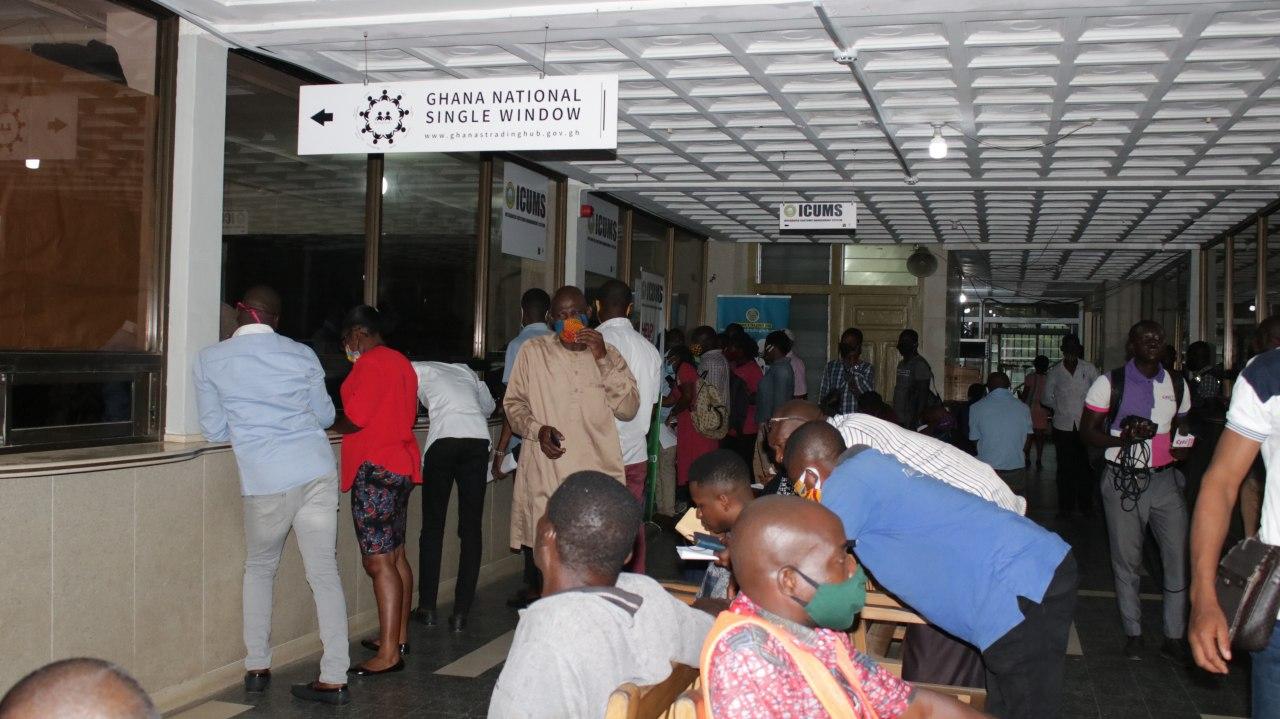 Some freight forwarders at the help desk situated at the Long Room of the Tema Port seeking assistance for their challenges. PICTURE BY DELLA RUSSEL OCLOO

Freight forwarders at the Tema Port have called on the government to consider waiving all time-related costs in the clearance chain for the period that the newly introduced Integrated Customs Management System (ICUMS) had not been able to function properly.

The costs includes, state warehouse rent charges and interest charges as well as demurrages that may accrue to shipping lines effective June 1, 2020 when the ICUMS implementation took off.

The call follows their inability to process their individual tax identification number (TIN) on ICUMS to allow for the creation of Unique Consignment Codes (UCR) which grants an importer or agent access to apply for permits on imports from regulatory agencies such as the Foods and Drugs Authority (FDA), Ghana Standards Authority (GSA) and other relevant bodies.

The situation had been attributed to intermittent trips on the Ghana Revenue Authority’s (GRA) g-governmental portal which serves as an interface for the TIN.

A similar situation that characterised the implementation on Monday, June 1, saw some freight forwarders besieging the Long Room facility at the port to protest the delays which they said were creating an added cost for them.

While the TIN on imports could not function appropriately, agents processing transit cargo meant for Burkina Faso, Niger and Mali had theirs functioning.

An Executive Member of the Association of Customs House Agents (ACHAG), Mr Phillip Badu-Mensah told Graphic Online at the port that, although some companies and self-declarants have been able to process new declarations, a larger number of individual importers and agents have challenges as the ICUMS has been rejecting their TIN.

Mr Badu-Mensah was concerned that, a failure by the government to come out with modalities to address the challenges would go to increase cost, a situation, he feared may degenerate into protestations, since most importers were apprehensive.

“If the government could work out waivers on the state warehouse dues and interest as well as the demurrage and rent charges that may accrue, we wouldn’t mind if officials may wish to use manual processes as a back-up to release cargo in the event the system is unable to function properly,” Mr Badu-Mensah said.

Another Agent, Ms Rahina Ibrahim of Dumanis Shipping who was exporting 52 containers of cashew to India and Vietnam, also expressed anger at her inability to access values to be paid as disinfection charges.

She expressed disappointment that help desks situated at the Long Room facility were unable to offer any tangible solutions to their challenges.

“The vessel gates were opened on Monday, but I couldn’t pay the charges to enable the consignment undergo compliance validation, and same is happening today, and if the vessel gate closes at 6pm, I may have to wait for days for another vessel to arrive, and since the products are packaged, it may begin to germinate, and I may not be able to export them,” a worried Ms Ibrahim said.

The Chairman of the technical committee of the Ghana Institute of Freight Forwarders (GIFF), Mr Johny Mantey, for his part called on government officials leading the ICUMS process to endeavour to engage the Registrar General’s Department on ways to get the TIN running so as to allow importers to process their declarations.