A photo that appeared in a Pensacola News Journal story published in 2014 resurfaced over the weekend in viral social media posts that incorrectly suggested a Pensacola military memorial was vandalized during the George Floyd protests.

A file photo that ran with the story in 2014 shows a Marine Corps commemorative bench at Veterans Memorial Park in Pensacola that was damaged in June 2012. The Vietnam Veterans Legacy Motorcycle Club paid $1,000 for a new bench, which was installed a few months later.

Over the weekend, a mash-up photo of the Marine Corps bench broken into two pieces and a vandalized memorial wall in Philadelphia’s Vietnam Veterans Memorial covered in graffiti, along with the words “f—ing scum bags,” made the rounds online. The Philadelphia photo was taken in 2016 after several star medallions were allegedly stolen from the memorial.

Although neither photo is connected to the recent protests, many Facebook users made that leap, leading others to rush in to debunk the viral post. In one post shared about 3,500 times, a user posted the mash-up photo with the comment, “They will destroy America unless we stop them.” Facebook has since added a disclaimer to the post marking it as “false information.” 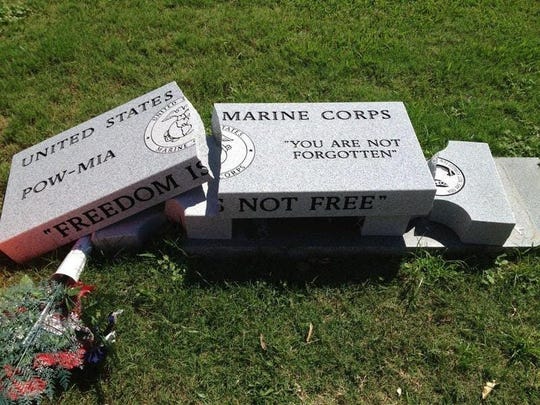 This photo of a Marine Corps commemorative bench at Veterans Memorial Park in Pensacola that was damaged in June 2012 was used in viral social media posts over the last week suggesting the damage happened as a result of the recent George Floyd protests. That is false. (Photo: News Journal file photo)

Veteran Marine Corps helicopter pilot Dan Lindemann was quoted in the 2014 News Journal story. On Wednesday, he said he finds it “disgusting” that people would post such dangerous and divisive posts during such a sensitive time.

“It’s extremely disturbing,” he said. “It’s absolutely disgusting to think that anyone would publish anything like that just to incite hatred. It boggles my mind, I don’t know what kind of sick puppy would think about doing this. I will never understand why anyone would distort the truth to create social unrest.”

On Tuesday, international news organization Reuters did a “fact check” story to debunk the viral post of the two images.

“While there have been reports of damage to memorials during recent anti-racism protests, the photographs in the post examined by this fact check are from several years ago,” according to Reuters.

Lindemann also said the 2012 incident with the Marine Corps POW-MIA bench, which had the words “freedom is not free” engraved on it, was actually not vandalism and was instead broken as a result of a lawn mowing accident.

Pensacola’s protests have been largely peaceful, and protesters have called for the Confederate monument in Lee Square to be removed. An online petition pushing to take down the memorial had more than 13,000 supporters Wednesday.

After initially saying that “now is not the time” to address the monument, Mayor Grover Robinson took to Facebook Live on Wednesday to say that he will ask the City Council to decide whether to remove the monument and whether to change the name of Lee Square back to its original name of Florida Square.

Robinson said he would bring the issue to the City Council at its July 16 meeting or perhaps have a special meeting before that. The policy would require another vote 30 days later, or the council could vote to waive that.

Looking At The Global Pandemic From A Ghanaian Lense

India must learn lessons on political consensus from New Zealand

India must learn lessons on political consensus from New Zealand

WHY YOU CAN'T MOVE TO GHANA AND GHANA DURING THE LOCK DOWN-ghanatoday.net

‘Juju’ adds nothing to your career–John Paintsil to young footballers-Ghanatoday.net