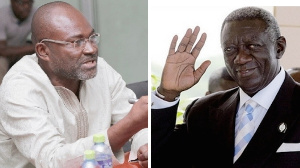 Paul Adom-Otchere, the host of Good Evening Ghana says the fall out between former President John Agyekum Kufuor and Kennedy Ohene Agyapong is not only because the latter decided not to support Alan John Kwadwo Kyerematen, the preferred candidate of Kufuor.

According to Adom-Okyere, the real problem has to do with a business Kufuor’s son and one Kwame Poku engaged in which did not go well, prompting Kufuor’s son to seek legal redress.

“The court agreed with President Kufuor’s son, where bailiffs had to go to Kwame Poku’s house in Tema to go and take his property to pay for the debt,” Adom-Otchere said on Good Evening Ghana on Thursday, June 25, 2020.

He explained that the Assin Central MP was hinted by journalists from Adom FM about the actions of Kufuor’s son, so as a worried NPP MP who did not want Kufuor’s name dragged into the mud by his political opponents, he decided to call on the president at the time and tell him what he, Ken Agyapong, had heard.

But the true story, according to Adom-Otchere was that Kennedy Agyapong was supporting Kufuor’s son and hence he, Ken Agyapong, was worried that the media would pick up that information which was likely to destroy Kufuor’s reputation at a time he was still president in 2007.

“Communication did not work. Kennedy Agyapong was not able to tell President Kufuor that this is what I stood for; I didn’t want your name to be destroyed, so, I was telling you to tell your son to hold, even me [Kennedy Agyapong], I can settle this matter,” Paul Adom-Otchere stated.

“He proceeded to settle it and even paid some money to the parties that needed to be paid but it looks like President Kufuor’s view of the matter; the narration that was given to him was that Kennedy Agyapong was against his son in this business. So, that’s what brought the confusion,” Adom-Otchere stressed.

The confusion between Kufuor and Ken Agyapong, Adom-Otchere emphasized, was not about politics but “it was about a business and the president was [erroneously] disappointed [in] a man he knew well, a man he gave access to”.

Kennedy Agyapong earlier told Paul Adom-Otchere on Tuesday, June 23, that President Kufuor sacked him from his house over his failure to support Alan Kyerematen, a presidential aspirant who was widely speculated to be Kufuor’s preferred candidates in the run-up to the December 2008 polls.

When the tenure of President Kufuor was about to end, 17 aspirants including many appointees wanted to succeed him, among whom were the current President and Alan Kyerematen, the current Minister for Trade and Industry.

Not from India, from New York: Chef Vikas Khanna’s reply to news anchor on his sense of hunger wins Internet - it s viral

Not from India, from New York: Chef Vikas Khanna’s reply to news anchor on his sense of hunger wins Internet - it s viral

We build while NDC is only good at destroying