The consequences of monetizing politics in Ghana 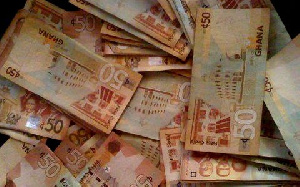 The starting point for dissecting this creeping whirlpool of monetising politics in Ghana is for one to really define or understand what politics is, and how its relationship with corruption and induced gifts can corrode the primary value and credibility of politics, and by extension, its overall consequential effects on quality of leadership and governance.

According to the Oxford Advanced Learner’s Dictionary “politics is the activities involved in getting and using power in public life, and being able to influence decisions that affect a country or society’’.

Indeed, the activities or processes of getting power is fundamental to the nexus of using the said power to influence the decisions of society, be it good or bad.

People put themselves forward in this country to seek Ghanaians’ mandate to lead at various levels of the democratic representation, including; constituency, regional and national party leaderships.

This also includes; aspirants seeking slots at parties’ parliamentary primaries to become parliamentarians and nominees for confirmation into positions of MMDCE among others.

These are all positions that bring potential aspirants into direct contact with the electorates or the various electoral colleges within the local government concept.

Politics is public service, where one is involved in activities to get power and use it in public life to influence decisions that affect his or her country.

Therefore, why are actors in the political industry that seek to take up leadership positions so determined to flex it up, even if it means adopting ways that damage the sanctity of the very office they aspire to occupy.

The constitutional age for parliament is 21 and the presidency is 40, whiles that of party leadership and MMDCE qualification could probably be 18 years and above.

Remember, there is no age ceiling for retirement except bad health or death that could bar people from trying to lead in any of these leadership positions.

How some of these honourable gentlemen and women of the nation get their mandates to lead in all the spectrum of leadership is what we are trying to find answers to, but for the purposes of time and space today, we will focus on the processes of becoming a Member of Parliament.

Already, we all know what it takes for MMDCs and political party executives go through in the hands of Assembly members and party delegates to get approval to head the district assemblies or occupy parties’ executive positions.

The way to Parliament

By statue, a member of parliament is an elected person of high integrity and honour representing a constituency in the nation’s legislative chamber – primarily for law-making and review of bilateral and multilateral treaties.

Therefore, for potential parliamentary aspirants who are expected to possess high level of integrity, to begin their journey for Parliament with vote-buying and a campaign promises that they will build schools, hospitals, roads, street-lights, build town water systems when elected as a parliamentarian, is not only absurd, but a display of dishonesty, which already disqualifies the aspirant.

It’s imperative to care about good political campaign regimes because it’s the foundation on which good leadership is birthed and undoubtedly has a link to quality leadership.

In August, 2019, an NDC party delegate took her party’s primaries in the Northern Region allegedly received a ‘dividend’ of GH¢2,300.00, two half-piece cloths and two different sets of mobile phones.

According to her, she received them from a total of four aspirants lobbying her to vote for them.

This information corroborates an earlier one by some delegates who alleged that some of the political marauders demand pictorial evidence from ‘delegate-clients’ to prove if they actually voted form them, before they could redeem the remaining pledges of hefty cash to them.

Whiles some pro-NPP media condemned this act of political vote-buying by their opponents, sadly, on Monday 22nd June, 2020, the vociferous communication head of the opposition NDC, Sammy Gyamfi, held a packed News conference to accuse the NPP of vote-buying, after many aspirants in the June 20th primaries of the NPP accused their own competitors of openly paying cash for votes.

It’s alleged by many that the NPP primaries recorded widespread vote-buying including the distribution of plasma TV sets and tricycles.

Whiles it rages nationwide, Tolon, Yendi and Nanton constituencies were alleged to have been the epicenter of vote-buying in the Northern Region.

Elsewhere, many people also complained and in the words of a former senior political science lecturer, Dr Richard Amoako Baah, while talking in an interview said ‘’ what we are doing is an auction, not an election because the highest bidder wins, as I have been saying, whoever pays the highest money wins”.

Then follows the general secretary of the NPP, honourable John Boadu, in the news, sternly warning one aspirant to desist from retrieving his bicycles from voters in the Assin North constituency.

This shows that the two major parties are both culprits in these absurdities.

Therefore many Ghanaians believe that the time for radical change in direction is now in order to disinfect the august chamber of parliament with potential crooks and fraudsters.

These new negative elements driving the political landscape have now created the flood gates for some people of doubtful characters and known conmen attempting to conquer the democratic space in Ghana and be at the centre of decisions, in the corridors of power and in the upper echelon of society.

It appears clearly that people who ‘own’ our political parties are aware of this creeping tornado in our politics and are worried, too.

Two of Ghana’s treasured legislative assets, Mr Alban Kingsford Sumana Bagbin and Mr Abdallah Banda recently expressed some of the sentiments on the potential aspirants for Parliament and the demands on members of parliament.

Unfortunately, many high quality members of parliament from both divide fell to some of the unethical practice , including; Mr Banda who became the latest victim at the primaries, and I know the effects on Ghana’s parliamentary democracy will be dire.

Discussing this phenomenon with more than a dozen senior elders in both parties and tragically, some of the leaders were not happy with the current trends, as they admited the potential effects will apparently affect the quality of work of parliament and by extension leadership in Ghana.

This is not to say that we, within the CSOs fraternity, have access to more information on the effects of bad political leadership on our country than other citizens because the consequences of poor or bad leadership stare at every citizen when you visit the grocery shop or the supermarket or at the fuel pumps.

Having posited the simple effects of vote-buying on our politics with it consequences on bad and poor leadership for both the citizenry and image of Ghana, I must conclude by saying that, what we need as a country now is a joint effort by people of conscience within both the NDC and NPP.

The joint efforts is to sanitise the political landscape and weed it of miscreants who may try to gain access to sensitive leadership positions or into the chamber of parliament as members.

Such joint intra-party ‘integrity clubs’’ will work at their various party levels to change the status quo for a better Ghana.

This will ultimately encourage quality people with good experience and high integrity to put themselves forward to work for Ghana and make our nation great and strong.

The writer is a development management specialist and Executive Chairman of Northern Ghana Aid in Tamale. He also sits on the Board of four private corporate entities.