With a resurgent coronavirus raging across California and anti-racism rallies and protests a near-daily occurrence, there’s a brand-new focus as candidates gear up for the fall campaign.

Rep. Harley Rouda, an Orange County Democrat, sent out a standard fundraising email Tuesday, looking for re-election cash. But the message was anything but traditional.

“These last few months have tested our leaders — and we’ve seen far too many fail,” the email read. “From organizing a PPE (personal protective equipment) drive in Orange County, to marching for Black lives, to simply wearing a mask, Harley has stood out for his leadership in this crisis.”

Instead, the email showed a picture of Rouda, wearing a mask, standing with a family of masked, sign-carrying supporters at a Black Lives Matter protest last month in Newport Beach.

These are issues that residents of Orange County care about right now, said Matilda Bress, a spokeswoman for Rouda’s campaign.

“This is a traditionally Republican part of California,” she said. But when George Floyd, a Black man, died at the hands of Minneapolis police in May, “there were mass protests in the district, standing up for the Black Lives Matter movement. It’s something to be proud of.”

Across the state, Democratic candidates are challenging Republicans on the pandemic and their response to racism, buoyed by President Trump’s unwillingness to support tough rules to contain the coronavirus, his attacks on Black Lives Matter and his refusal to deal with the country’s legacy of inequality.

• In the Central Valley, Rep. Josh Harder, D-Turlock (Stanislaus County), slammed his Republican opponent, former Turlock City Councilman Ted Howze, as “the most racist candidate for Congress in 2020,” based on a series of anti-Black and anti-Muslim posts on Howze’s Facebook page.

• Assemblywoman Christy Smith, D-Santa Clarita (Los Angeles County), argued in a fundraising email last week that with Trump and GOP Rep. Mike Garcia, whom she will face in November, holding rallies without masks, “an outside observer might think that the pandemic is coming to an end. They’d be wrong. Dead wrong.”

It’s not only Republicans who are being attacked. San Francisco’s Shahid Buttar, who is challenging House Speaker Nancy Pelosi in a Democrats-only contest in November, charged that Pelosi and other House Democrats “have attempted to co-opt the (Black Lives Matter) movement, resorting to pandering rather than showing solidarity.”

The new focus is a good one for Democrats, said Adam Probolsky, a pollster based in Orange County.

“Social unrest and the coronavirus are two issues that people talk about, with the coronavirus leading into worries about health care,” he said. Trump and his leadership also top voters’ concerns.

“Trump constantly puts people in uncomfortable and difficult positions,” Probolsky said, and that goes double for Republican politicians looking to win in November. 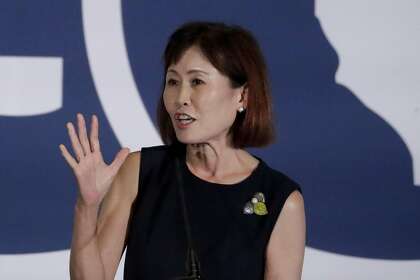 The politics of the pandemic have changed everything in 2020, said David McCuan, a political science professor at Sonoma State University.

“The president will want to bring the economy front and center” in the fall campaign, he said. But the recession and double-digit unemployment brought on when the coronavirus forced businesses across the nation to shutter make that a less effective talking point than it might have been.

“Some other issues like North Korea, the Middle East and even China will be a lot less important,” McCuan said.

Despite Trump’s willingness to fight Democrats on issues like taking the names of Confederate leaders off military bases and preserving statues of people linked to racism, other GOP leaders would rather change the topic.

On Wednesday, the Republican National Committee put out a digital ad about the new United States-Mexico-Canada Agreement on trade.

“As more of his ‘Promises Made, Promises Kept’ agenda, President Trump has righted the wrongs of decades of failed trade deals, helping to ignite the Great American Comeback,” committee Chairwoman Ronna McDaniel said.

Republicans are fighting back against the Democratic charges in California, pointing to what they’ve done to battle the coronavirus in their communities. Howze and Valadao, for example, argue that Democrats are supporting calls to defund the police by slashing budgets and downsizing law enforcement.

“The party of Nancy Pelosi, AOC (New York Rep. Alexandria Ocasio-Cortez) and the radical Democratic socialists … want to defund the very organization that protects our communities, families and homes,” Valadao said in a email last month.

The National Republican Congressional Committee also has weighed in, accusing both Cox and Smith of refusing to stand against calls to defund the police. Democrats generally describe the strategy as redirecting some duties from law enforcement to social service workers.

But the nastiest and most visible dispute is in Orange County, where Rouda is facing a challenge from Republican Michelle Steel, chairwoman of the county Board of Supervisors.

“Our opponent is charged with the county’s COVID-19 response, which deals with public and economic health,” said Bress, the spokeswoman for Rouda. “We will talk about her inability to be an effective leader.”

But Rouda “can sit on the sidelines and snipe,” said Lance Trover, a spokesman for Steel. “He knows he’s facing a strong opponent, who is in the arena every day, making hard decisions.”

“Rather than focusing on how he can help,” said Matt Ciepielowski, her campaign manager, “Rouda spends his time on Twitter distorting and politicizing Michelle Steel’s work to help Orange County families get back on their feet following this devastating pandemic.”