Not a nation of immigrants: Behind politics of immigration in Trump’s America 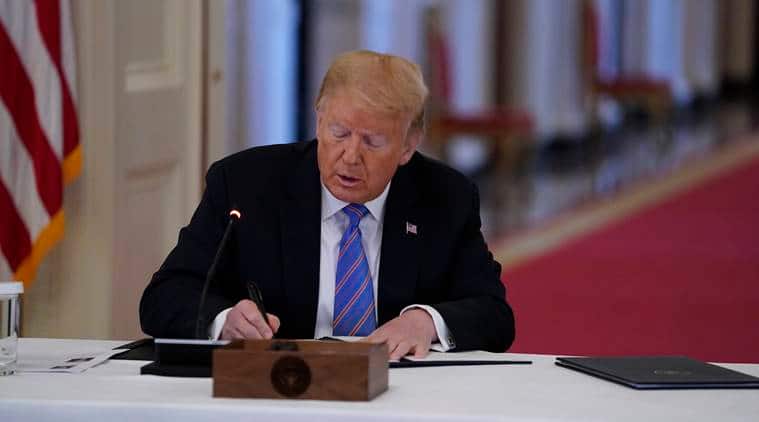 The burden of the suspension — till the end of this year — will fall mainly on US high-tech firms, and on Indian IT services firms like Tata Consultancy that rely on temporary skilled migration for a part of their US operations. (AP Photo)

The US decision last month to temporarily stop issuing H-1B and H-4 visas — along with a slew of previously announced restrictions on legal immigration — impacts India more than any other country. H-1B visas are used mostly by high-tech industries to bring employees with specialised skills and their families — the H-4 visa being designed for this purpose — to the US. There were an estimated 5,83,420 authorised H-1B visa holders as of September 2019. In recent years, about 70 per cent of these visas have gone to Indian nationals.

The burden of the suspension — till the end of this year — will fall mainly on US high-tech firms, and on Indian IT services firms like Tata Consultancy that rely on temporary skilled migration for a part of their US operations.

In his June 22 proclamation, President Donald Trump also expanded and extended halts to the issuance of a few other types of visas. They include non-immigrant visas for family members of US citizens and certain lawful permanent residents, L-1 and L-2 visas used for intra-company transfer of high-level executives to US offices with the highest share going to Indian nationals in 2019, and the freeze on green cards — permanent residence authorisation — for new immigrants.

The curbs have been justified on grounds of giving priority to American workers as the economy recovers from the effects of the pandemic. But it is more likely that the pandemic is being used as cover to give a final push — before the November elections — to efforts already under way to harden channels of legal immigration.

These moves that disproportionately affect Indians sit uneasily with the growing ties between the US and India, and the much-touted friendship between President Trump and Prime Minister Narendra Modi.

“Putting up a ‘not welcome’ sign for engineers, executives, IT experts, doctors, nurses and other workers won’t help our country, it will hold us back,” says Thomas Donohue, who heads the US Chamber of Commerce. Google CEO Sundar Pichai and prominent corporate leaders with immigrant roots such as Elon Musk have also criticised Trump’s decision, reiterating the argument that immigration is good for US economic prosperity.

But political debates over immigration are rarely about cost-benefit appraisals. Politicians often prioritise values associated with putative ideas about a fixed national identity over economic gains.

Reducing immigration — both legal and unauthorised — was the centrepiece of Trump’s last election campaign; and it has been on top of the policy agenda during his first term. Steve Bannon, who was Trump’s chief electoral strategist and subsequently the chief strategist at the White House, continues to exert influence on his immigration policies. In a 2015 interview with Trump, Bannon offered a racially-tinged assessment of Silicon Valley. Trump, who has not always been a Republican, nor a hard-liner on immigration, narrated a story about a young man who reluctantly returned to India following his Harvard degree because of visa restrictions. He started a “very successful company” in India, said Trump, but he “wanted to do that here… We have to keep our talented people in this country.” Bannon disagreed. Two-thirds to three-quarters of Silicon Valley top managers, he asserted, are from “South Asia or from Asia” — an inaccurate and exaggerated figure. “A country is more than an economy,” lectured Bannon, “we are a civic society.”

Indians began coming to the US in significant numbers only in the late 1960s after the passage of the Nationality and Immigration Act of 1965. Prior to it, there were restrictions on the immigration of Indians — and of most other Asians. There were national origin quotas in immigration laws that favoured countries of Northwestern Europe. Just before the 1965 law, citizens of three countries — Ireland, Germany and the UK — together had claims to as many as 70 per cent of the total visas available to enter the US. The new law replaced the national origin quotas with a racially blind distribution of visas, with preferences based on family relationships and skills subject to caps for individual countries.

That it was adopted just a year after the Civil Rights Act of 1964 is not accidental. In the Cold War competition for global influence, America’s racially biased immigration laws were becoming as much of a liability for the US as its long-standing racial segregation practices.

After 1965, the pattern of immigration to the US changed dramatically. While immigrants came mainly from Europe before 1965, newer immigrants have not. It transformed the demographic make-up of the US. Without the 1965 law it is unlikely that the talk of multiculturalism would have found such resonance in late 20th century US public culture. But these profound changes were largely unanticipated by the law’s architects.

Family reunification was expected to bring mostly relatives of US citizens of the time and keep the country’s racial and ethnic composition more or less unchanged. That the law would initiate successive waves of “chain migration” was not anticipated. Once a single new legal immigrant became a naturalised citizen, he or she could sponsor immigrant visas for his or her parents and siblings, who in time could sponsor more relatives. As much as two-thirds of legal immigration to the US is now based on family reunification.

Anxiety about the unintended consequences of the 1965 law is the driving force behind the politics of immigration in the US during this century. It has shaped the worldview of key architects of Trump’s immigration policies.

Who Are We? The challenges to America’s national identity, the 2004 book by the late Samuel Huntington, points to the appeal of anti-immigration sentiments even in highbrow circles. Huntington challenged the notion of America as a nation of immigrants — a favourite catchword of liberal America. This description, he says, stretches “a partial truth into a misleading falsehood” and ignores “the central fact of America’s beginning as a society of settlers.” America’s core culture still remains, “primarily the culture of the seventeenth- and eighteenth-century settlers who founded American society.”

Huntington’s book was controversial. But its central argument that migration now presents an unprecedented challenge to American national identity has led Peruvian-American writer Carlos Lozada to describe Huntington as “the prophet of the Trump era.”

With the latest aggressive moves to restrict legal immigration, Trump strategists hope to energise his political base and appeal to the anxieties of a larger constituency. Portraying Democrats as beholden to pro-immigration special interests and lobbyists could once again be a winning strategy.

This article first appeared in the print edition on June 3, 2020 under the title ‘Not a nation of immigrants’. The writer is professor of Political Studies at Bard College, New York.

Military Deployment in Volta is a waste of resources

Military Deployment in Volta is a waste of resources

It’s unfair to blame the leadership of NDC for the 2020 defeat – Lecture Dr. Alidu Seidu