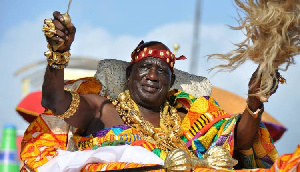 The Omanhen of the Oguaa Traditional Area, Osabarimba Kwesi Atta II, has revealed that he danced in his room when Prof Naana Jane Opoku-Agyemang was nominated as the running mate of the opposition National Democratic Congress (NDC) flag bearer.

“I don’t know how to dance ‘bugaloo’ but that day I danced ‘bugaloo’ in my room,” he said as an NDC entourage at his palace burst into laughter.

Bugaloo is a fast dance of Afro-American origin performed by couples and characterised by dancing apart and moving the body in short, quick movements to the beat of the music.

Osabarimba Atta made the comment when Prof. Opoku-Agyemang and her entourage of NDC leaders including the Member of Parliament for North Tongu, Mr Samuel Okudzeto Ablakwa, the 2020 Deputy Campaign Manager of the NDC, Mr Alex Sebgefia, and the Central Regional Chairman of the NDC, Mr E K T Addo, paid a courtesy call on him last Wednesday.

The Omanhen of the Oguaa Traditional Area also advised Prof Opoku-Agyemang, to pursue decent politics ahead of the December polls.

He advised the opposition party’s first female vice-presidential candidate against letting insults and acrimonious language be part of her campaign.

“Don’t respond to everything you hear, listen to all but you must not let insults and acrimonious language be part of your politics,” he advised.

According to the paramount chief, Ghana’s politics is dominated by acrimony and hence it would require strength of character to conduct clean campaigns devoid of insults.

“The responsibility is huge and the nature of people, particularly in politics, is different,” he said.

According to the state-owned newspaper, Daily Graphic, the visit of Prof. Opoku-Agyemang to the Emintsimadzi Palace in Cape Coast was part of her tour to introduce herself to the chiefs and people of the Central Region, her home region after she was officially introduced as the running mate of the flag bearer.

There is no evidence to suggest Mahama is a corrupt person

How we got to Kamala Harris’ ascent