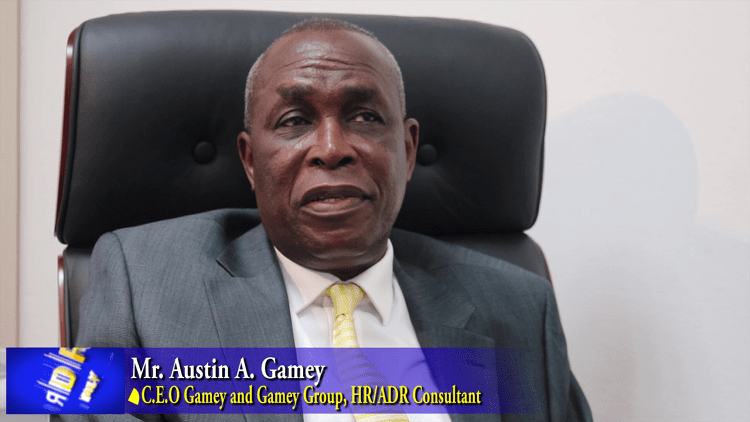 Labour consultant, Austin Gamey has denied claims that there were unseen hands impeding the payment of exit packages for the staff of GCNet.

Mr Gamey is a consultant to GCNet and some staff of the company have alleged that he was the one who was advising the company not to pay the exit packages to them.

This comes a day after the workers started a sit down strike to mount pressure on the management of GCNet to pay them their exit packages in accordance with the Labour Act, 2003.

Reacting in a radio interview with Accra based Citi FM monitored by Graphic Online, Mr Gamey appealed to the workers to be patient and assured them of their exit packages once GCNet has received a favourable review of the judgement by the National Labour Commission (NLC).

“Yes, as far as I know, the owners are not happy with the way the whole thing went about. Of course, you know that government abrogated their agreement not by the will of the workers, not by the will of the management. The management didn’t lay them off, it was government that abrogated the agreement between them and GCNet and gave the contract to UNIPASS. As a result the place was closed down.”

“When management was preparing, they were preparing to pay them, then because government is going to be the one to be paying back the money to the owners, and they realised that the computation was done the wrong way and the matter went on to arbitration and its being reviewed.”

“Once we complete the review, it would be paid, I’m sure but they will have to learn to be patient, but I don’t know how they will go about it. Its up to the owners to decide what to do. I really have no hands in it,” Mr Gamey said in the Citi FM interview.

A three-member arbitration panel under the auspices of the National Labour Commission (NLC) has ruled in favour of about 150 staff of Ghana Community Network Services Limited (GCNet) over a redundancy dispute with GCNet.

Consequently, the arbitration panel has ruled that GCNet is under obligation to pay each of the staff a redundancy package in accordance with the company’s policy “without any adjustment or variation”

“The effective date for the redundancy is August 31, 2020 and this shall be the last day of employment of the affected staff with GCNet,” the panel held in a ruling dated September 4, 2020.

GCNet was an information technology firm which used to facilitate trade services at the country’s ports and had a contract government until 2023.

In April this year, the government terminated the contract, leading to a shutdown of its operations in May, this year.

The government cancelled the contract to allow the full rollout of a new customs clearing system, Uni-Pass, which according to the Ghana Revenue Authority (GRA), would centralise the processing and handling of all import and export documentations, a system known as a single window clearing system.

As a result of the termination of the contract, GCNET decided to lay off some of its staff and accordingly notified Chief Labour Officer of its intended redundancy.

Documents filed at the arbitration hearing showed that GCNet had an HR Manual that obliges it to use a certain formula to pay its staff during a redundancy exercise.

In view of the redundancy exercise, management of GCNet and the Staff Association signed a Memorandum of Understanding (MoU) to implement the redundancy in conformity with the HR Manual.

As a result of the MoU, management of GCNet issued termination letters to the affected staff with the redundancy set to take effect on August 31, this year, but payment to be done on or before June 30, this year.

According to the ruling, two days before the deadline for the payment of the redundancy package, the management of GCNet wrote to the Staff Association that it could not pay the package and asked for a renegotiation of the redundancy pay as stipulated in the HR Manual.

This led to a dispute which ended up at the NLC, with the two parties agreeing to a voluntary arbitration.

In view of that, GCNET argued that the MOU it signed with the staff association was null and void and, therefore, not binding.

Case of the Staff

The staff association, on the other hand, presented a case that the HR policy or manual was the conditions of employment developed by GCNET for its entire staff, which it had been implementing since it commenced operations and, therefore, it was binding on the company.

Also, it argued that per Article 21(1) (e) and Article 24 (3) of the 1992 Constitution, freedom of association was guaranteed and there is no law that states that every association must be registered.

It further contended that the government of Ghana had agreed to pay GCNet compensation for abrogating the contract and, that compensation would include the redundancy package for staff.

“In fact, we find that there has been no negotiation of redundancy pay during this redundancy exercise,” the panel held.

The panel also rejected the claim by GCNet that it had no capacity to pay the redundancy package.

Politicians cautioned to desist from engaging minors in politics, and exhibit high sense of emotional intelligence

Akufo-Addo is peace-loving so vote for him