By reviewing published literature on viral loads and viral shedding, researchers found that viral loads for severe acute respiratory syndrome coronavirus 2 (SARS-CoV-2)peak before symptoms are seen. This has substantial implications for prevention strategies. The researchers from the University of Colorado, Boulder, the Institute for Disease Modeling, and Legacy High School, Marysville have published their work on the preprint server medRxiv*.

Since the beginning of the COVID-19 pandemic caused by the SARS-CoV-2 coronavirus, there have been many efforts to understand how the disease is so transmissible.

Several studies have suggested that the spread of this coronavirus is different from other recent coronaviruses causing SARS and MERS. In both SARS and MERS, the viral load, or the amount of virus in an infected person’s blood, and viral shedding or infectiousness are the highest after the onset of symptoms.

However, for SARS-CoV-2, studies suggest viral load and infectiousness is the highest before symptom onset. This makes it challenging to implement strategies to prevent disease spread, compounded by the fact that many patients are asymptomatic.

Mathematical modeling is a useful tool to quantify and predict the spread of diseases, and the results obtained can be used to guide effective strategies to prevent spread and recommendations for social distancing.

Using subpopulation-specific viral dynamics in models is useful for evaluating the relative contribution of different factors such as symptomatic and asymptomatic patients, age, and comorbidities. Several reports have reviewed published studies on viral dynamics for coronaviruses to provide pooled parameters to help such models.

To do this, they searched PubMed using several relevant keywords and selected relevant studies. They first screened the papers by title, then abstract, and then by data availability, ending up with 66 papers to analyze viral shedding and 43 papers for viral loads. This resulted in data for 932 and 1,198 individuals for viral loads and viral shedding, respectively.

From these papers, the authors extracted different types of data, such as the location of study, start and end period, viral load data, viral shedding data, and anonymized patient information. Then, they used a series of generalized additive models to analyze this data statistically. 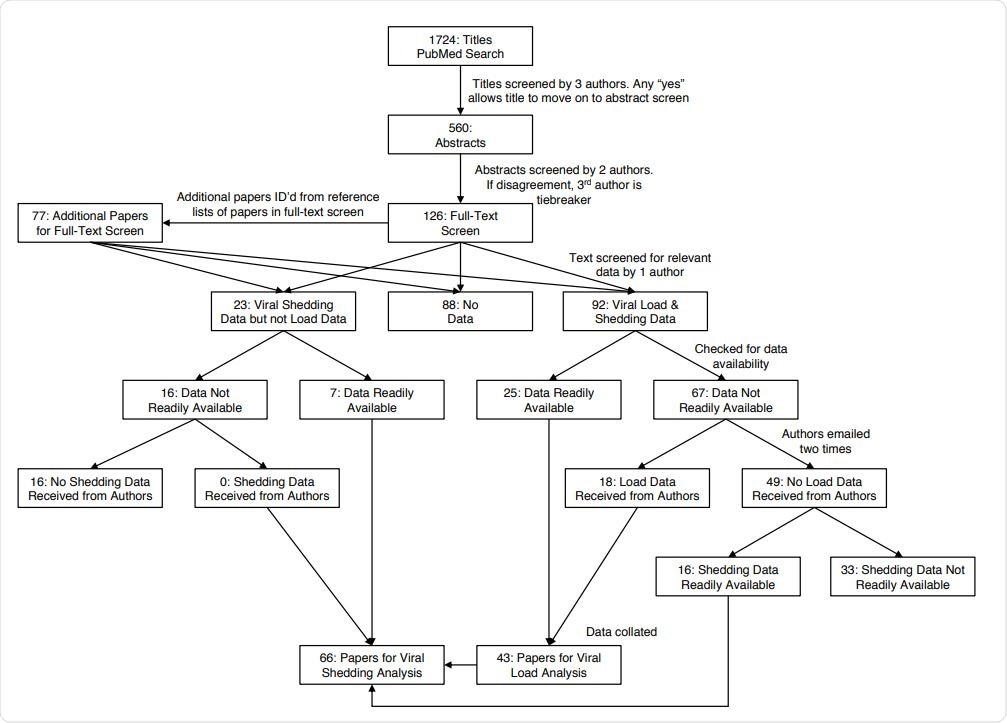 Summary of systematic review. A search of PubMed sources identified 1724 records. After title and abstract screening, 203 titles underwent full-text screen. Forty three and 66 studies met the inclusion criteria and were included in the systematic review for viral load and shedding analysis, respectively.

This contrasts with what they saw for the MERS and SARS coronaviruses, where viral loads peaked after symptom onset.

For viral shedding, the team found that the durations were similar for SARS-CoV-2 and MERS, the median being about 4.8 days and 4.1 days, respectively. This was longer than that for SARS, where viral shedding occurred for a median 1.2 days.

They found no differences in the duration of viral shedding with sex or age of the patients. Both respiratory and gastrointestinal samples had similar durations of viral shedding and could continue to about 50 days after onset of symptoms.

The viral loads and viral shedding durations are different for different coronaviruses, and there are significant differences between SARS-CoV-2 and SARS or MERS. 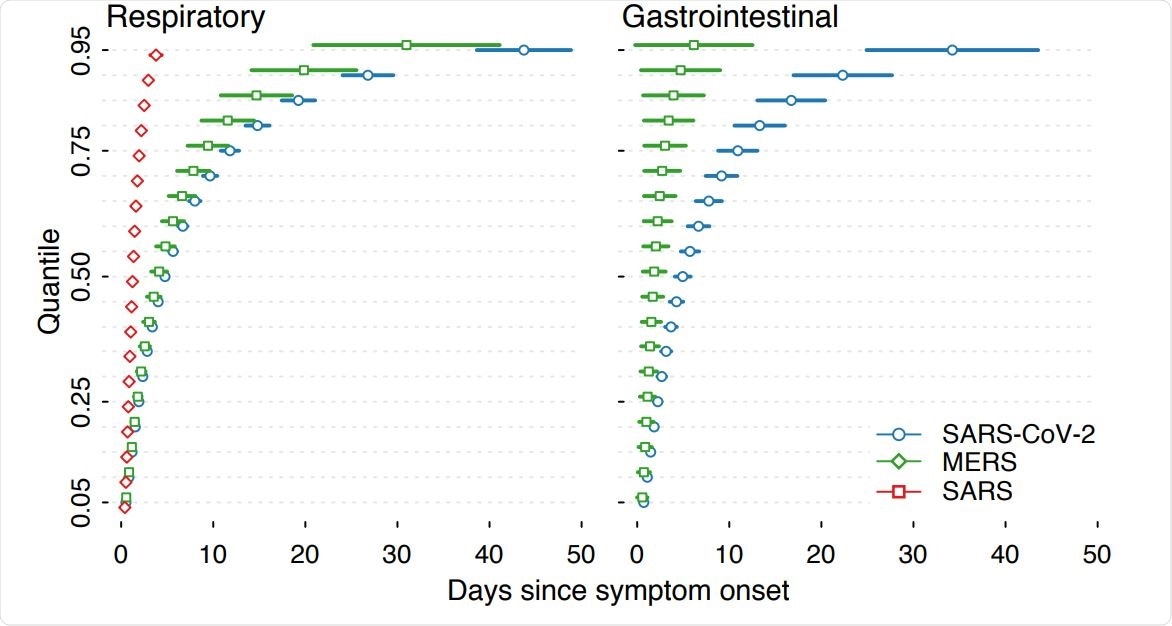 SARS-CoV-2, MERS, and SARS viral shedding over time. Figure shows the lognormal estimates of viral shedding for the three diseases with both gastrointestinal and respiratory samples.

The authors write, “ignoring these important differences would make predictions from simpler models incorrect with potentially dangerous public health responses.” In particular, since the maximum viral loads for SARS-CoV-2 are during the pre-symptomatic stage, they suggest the need for robust contact tracing and isolation measures.

Some limitations of the study, as reported by the authors, include conversion of Ct to copy number using a standard curve and the limited number of fecal samples available for SARS and MERS.

Furthermore, the authors noted that they found only 59% and 27% of the papers had freely available viral shedding and viral load data, respectively. When they contacted the authors for data, just a little less than half responded, and 20% provided the data requested.

They suggest stricter standards for data availability statements, which would also provide authors the chance to clarify what data is available and it is not, clarify why.

“To keep the strong culture of open science moving forward, we, as scientists, need to ensure that data sharing is a norm, not an exception,” write the authors. They plan to continue adding to their dataset as new studies are reported.

medRxiv publishes preliminary scientific reports that are not peer-reviewed and, therefore, should not be regarded as conclusive, guide clinical practice/health-related behavior, or treated as established information.

Scandals and sickness: How they could impact political races

Arsenal complete the signing of Thomas Partey from Atletico Madrid-Ghanatoday.net