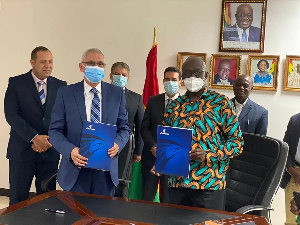 Ghana on Wednesday October 21, 2020 signed a MoU with EgyptAir

Ghana on Wednesday signed a Memorandum of Understanding (MoU) with EgyptAir for the establishment of a new flag carrier, AvationGhana has revealed.

The choice of Cairo-based EgyptAir as the preferred strategic partner follows series of engagement with senior management team of the airline and the committee of aviation experts constituted by the Aviation Ministry over the past two weeks.

Despite the signing of an MoU last year with Ethiopian Airlines to actualise the vision of a new home-based carrier, the deal was held back due to a lack of agreement over key issues such as routes, funding, and tenure of the management contract among others.

EgyptAir, according to AviationGhana sources, offered a better deal in terms of funding for the new airline, routes, fleet and personnel– with Ghanaians expected to play key roles in the new entity once it is established.

Aviation Minister, Joseph Kofi Adda, told AviationGhana shortly after the signing of the MoU that: “We were looking out for what is best for Ghana in all our engagements with the potential partners.

” This [The deal with EgyptAir] has come at a time when the Africa Continental Free Trade Agreement is to come into effect early next year. Once the airline is set up, it is expected to play a key role in passenger and cargo transport within the continent and between Africa and other parts of the world.

Cairo-based EgyptAir currently operate scheduled passenger and freight services to more than 75 destinations in the Middle East, Europe, Africa, Asia, and the Americas.

2020 Polls: In the Brink of War, Your Diplomatic Passports Won’t Save You