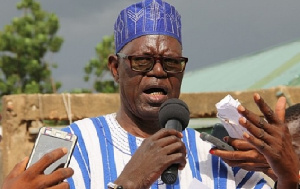 Former Member of Parliament for the Zebilla Constituency, John Ndebugri

Former New Patriotic Party (NPP) lawmaker for the Zebilla Constituency in the Upper East Region, John Ndebugri has revealed that his open campaign against his party is to rescue Ghana from the mess created under the watch of President Nana Addo Dankwa Akufo-Addo.

The Private Legal Practitioner who has for some time now been attacking the NPP believes that things are not going well as expected; stating that there was the need for him to join Former President John Dramani Mahama to rescue the country from the mess it finds itself in.

Addressing supporters of the NDC last weekend during a Health Walk-in Zebilla, Mr. Ndebugri said, “I am neither NDC nor NPP but I want to join forces with my brother Mahama to rescue Ghana from the current mess. President Nana Akufo-Addo in opposition promised many many things which he has not fulfilled.”

According to him, Akufo-Addo in opposition accused Mahama of running a family and friends’ government but he is now doing worse things than what was seen under the erstwhile administration.

He cited the appointment of Joyce Bawah Mugtari, a cousin to the former President and some few friends which became a major campaign tool for the NPP then in opposition.

“But now, hardly will you hear names from the Jubilee House like Nuhu, Ibrahim, Abugri. Those there are all Akufo-Addo’s family and friends.”