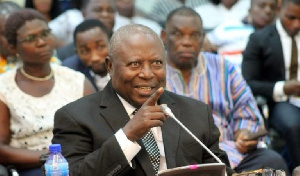 Martin Amidu has warned former President John Dramani Mahama that he should not drag the Office of the Special Prosecutor (OSP) into partisan politics.

He observed that John Mahama and the NDC in mentioning the OSP seek “to demonstrate their determination to prevent and fight corruption as a reason why the electorate must consider them as the candidate of choice for the upcoming elections”.

According to Amidu, he finds such statements as needless within the objects, mandate and functions granted to his office under the OSP Act 2017 (Act 959).

In a statement copied to GhanaWeb, Martin Amidu noted, “These pronouncements constitute interferences with, and attempts to influence the independent mandate of this Office to investigate, and prosecute certain electoral offences apportioned to this Office under the law which constitutes corruption and corruption-related offences as clearly stated in Section 79 of Act 959,”

He added, “Any Ghanaian worthy of putting himself forward as presidential candidate for the upcoming elections should know the content of the Office of the Special Prosecutor Act, 2017 (Act 959) by now.”

Amidu further added, “He [John Mahama] must know by now that under section 4 of Act 959, except as otherwise provided for in the 1992 Constitution, the Office is not subject to the direction or control of a person or an authority in the performance of the functions of the Office even when the Office acts upon the authority of the Attorney-General to initiate and conduct the prosecution of corruption and corruption-related offences.”

Amidu’s statement is in reaction to John Mahama’s campaign promise that if elected President of Ghana, he will not interfere with the work of the Special Prosecutor.

“If we come [into office], we’ll leave the Office of the Special Prosecutor to work freely, we will maintain it because it was established by Parliament. And the point is I will warn my appointees against messing with him [Amidu] because, if he gets hold of any of them for corruption, I cannot intervene. And that should be the attitude of a President towards corruption,” Mahama said on Adom FM this week.

Political interference is rampant in Ghana, hence some pundits have observed that Amidu’s reaction is unnecessary.

You can’t be trusted – Ofori-Atta chastises Mahama on Economy